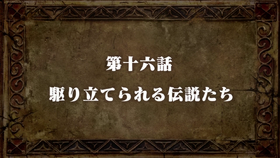 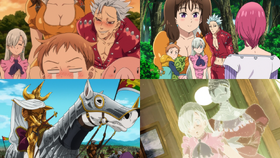 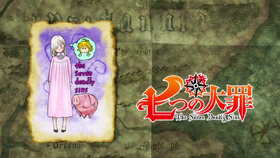 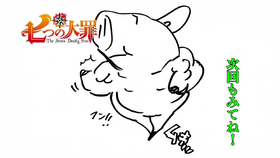 The Legends, Provoked「駆りたてられる伝説たち Karitaterareru Densetsu-tachi」 is the 16th episode of The Seven Deadly Sins anime series.

Gowther is welcomed by the others into their group, but he soon finds out the true secrets behind them by delving deep into their memories and emotions. Meanwhile, Hendrickson and Helbram have the hilt of Meliodas' sword in possession, in which they plan to use it as a fragment of a ritual relic, known as the Coffin of Eternal Darkness, to resurrect the Demon Clan as a mean to start a Holy War.

At the Boar Hat, Holy Knight Vivian suddenly appears and kidnaps Elizabeth and Hawk. Diane throws Meliodas, Ban and Gowther toward the Kingdom of Liones, where the three are bombarded by an army of Holy Knights on the north side of the castle.

Meanwhile, Arthur Pendragon, the young king of Camelot, has approached the south side of the castle with his own army.

Elizabeth asks Gowther to join them on their quest. He accepts and Meliodas suggests that they get drunk to celebrate. Meliodas asks Gowther if he knows who assaulted him when they fled from Liones back when they were framed for wanting to overthrow it. Gowther says that he does know and that it was Merlin, the Boar Sin of Gluttony. Meliodas asks why but Gowther says that he doesn't know why. Gowther goes on to air everyone's dirty laundry causing the group to get riled up. Meliodas tells him that it's probably not wise for him to delve so deep into other peoples memories. Elizabeth asks Meliodas what kind of person Liz was. Meliodas tells her that they are the exact opposite but similar because they are both strong.

Dreyfus asks Howzer if anything out of the ordinary happened during his absence. Howzer tells him that there have been reports of more Holy Knights joining the New Generation. Dreyfus says that it is time for him to have a little chat with Hendrickson. Guila and Jericho practice fighting and Guila disarms Jericho. Guila asks her why she is so distracted and Jericho says it is because she followed Dawn Roar and saw the Seven Deadly Sins battle a monster. Jericho also tells her that she felt two kinds of magical powers emitting from the monster and one was of a Holy Knight. Jericho shows her an amulet that she found on the corpse of the monster and Guila gasps because she knows that it belonged to her father, Dale.

Helbram and Hendrickson open up a gateway on the seal to the Demon Clan. However, it was not big enough for them to pass through because they are missing a fragment to undo the seal. Meliodas tells the group that he is going to break into the castle and get his sword back before going to look for the two remaining Deadly Sins. Meliodas tells him that the sword is actually a fragment of a ritual relic that was used to seal away the Demon Clan. Elizabeth wonders why Hendrickson and Dreyfus would want to bring back the Demon Clan.

Hendrickson reveals that he wants to bring on a Holy War. Dreyfus is upset but Hendrickson reminds him of how he helped kill his brother so that Dreyfus could become a Great Holy Knight. Hendrickson asks that Dreyfus returns the favor or else he will kill him himself.

A mage appears in the Boar Hat and kidnaps Elizabeth because she is the missing piece to breaking the seal to releasing the Demon Clan. Meliodas rushes out of the Boar Hat to go after her. Ban and Gowther decide to go with him. Meliodas has Diane throw them to their destination. They land outside of the North Gate and fight their way through to the castle. But before they reach the gate, they feel a large magical presence coming from the south.

At the South Gate, an army appears and it's leader is Arthur, new king of Camelot.

Retrieved from "https://nanatsu-no-taizai.fandom.com/wiki/Episode_16?oldid=139698"
Community content is available under CC-BY-SA unless otherwise noted.