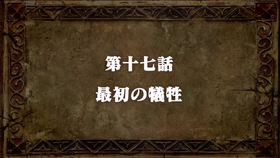 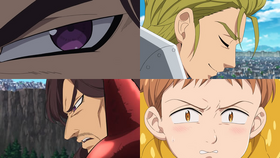 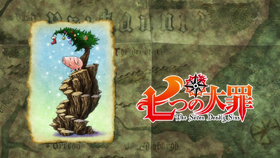 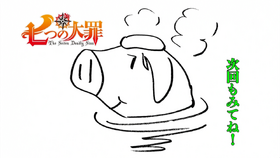 The First Sacrifice「最初の犠牲 Saisho no Gisei」 is the 17th episode of The Seven Deadly Sins anime series.

Hendrickson tries to convince Arthur Pendragon to leave the castle, but to no avail. Instead, Hendrickson escorts Arthur inside the castle and suddenly engages him in battle. Meanwhile, Elizabeth and Hawk are teleported inside the dungeon of the castle, and they try to find a way out.

Meliodas, Ban and Gowther manage to defeat the army and sneak inside a town of the kingdom, while King summons his black hound Oslo to use its mouth to teleport Diane inside the castle. However, Diane is attacked by Guila, Jericho, Gilthunder, Howzer, Helbram and Great Holy Knight Dreyfus.

Diane tries to defend herself, but Dreyfus overpowers her with an attack that sends her crashing onto the town streets. After Diane wander the streets and protects Zeal from being crushed by a falling building, both Howzer and Guila switch sides to defend Diane.

Arthur Pendragon of Camelot is at the south gate of Liones. Hendrickson says that he will take care of him and that Dreyfus can deal with the Seven Deadly Sins. King Arthur is here to meet with the King but Hendrickson tells him that he's fallen ill. King Arthur tells them that his companion has the ability to cure the King. Hendrickson still tries to get them to leave but King Arthur refuses to do so.

Elizabeth is transported to a locked chamber with Hawk. Hawk freaks out because he needs to go to the bathroom and knocks down the door. The two of them escape. Howzer is standing with other Holy Knights thinking about how he is glad Diane is not there. Dreyfus asks Helbram what Hendrickson is up to. Gowther uses his powers to hypnotize the charging crowd into fans instead of foes. They fawn over the Seven Deadly Sins and the trio manage to get into the Capital. Hendrickson attacks King Arthur but Arthur is skilled in fighting as well. Diane asks King if he thought that Meliodas would go to such great lengths for her if she were ever captured. King believes that he would. King summons Oslo and he uses him to transport them to Liones.

Dreyfus goes to Hendrickson's magical research center. Suddenly, they hear a boom from down below and drop through the floor to find Diane. Dreyfus asks Diane what she's doing here and she tells him to give her Elizabeth. Jericho attempts to kill Diane but fails because Diane used her sacred treasure to deflect it. Gilthunder uses his Thunderbolt Execution to harm Diane along with Helbram and Howzer joining in. Diane manages to survive their attacks by performing Ground Gladius. Dreyfus and Diane go toe to toe but Dreyfus delivers a killing blow to Diane's chest, causing her to fall to the ground. Dreyfus asks Helbram if it is true that Elizabeth is in the Capital and Diane confirms that it is as she tries to stand. This time Dreyfus sends Diane flying into the Capital and Guila rushes after her because she is worried about Zeal.

The people of Liones begin to throw rocks at Diane because Dreyfus has called her their enemy. Diane almost gives up but remembers her promise to Elizabeth and decides to keep it. The city begins to be destroyed but it is not Diane who's doing it. It is actually Helbram. This upsets Guila who questions whether or not the Seven Deadly Sins really did betray the kingdom ten years ago. Zeal suddenly runs out into the open and sees Guila. But before he can run to her a building collapses above him. Diane gets hit by it as she protects Zeal from getting hurt. Dreyfus arrives and Jericho asks if she can give the killing blow. However, Guila and Howzer stop them as they switch sides to protect Diane.

Retrieved from "https://nanatsu-no-taizai.fandom.com/wiki/Episode_17?oldid=138171"
Community content is available under CC-BY-SA unless otherwise noted.