Even If It Costs Me My Life 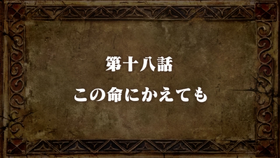 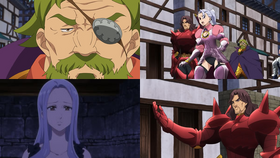 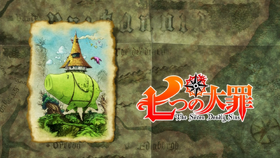 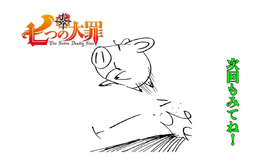 Even If It Costs Me My Life「この命にかえても Kono Inochi ni Kaete mo」 is the 18th episode of The Seven Deadly Sins anime series.

The combined powers of Howzer and Guila have little to no effect. When Dreyfus attacks Guila, Gowther saves Guila in the nick of time and faces Dreyfus alone. Meanwhile, Elizabeth and Hawk encounter Margaret Liones, Elizabeth's eldest sister, in a cell. Vivian appears, teleporting Hawk elsewhere, knocking Elizabeth unconscious and releasing Margaret from her cell.

Gowther traps Dreyfus in a nightmare, but Dreyfus somehow snaps out of it and pierces Gowther in the chest. Once a heavily injured Dreyfus leaves with Gilthunder, Helbram attempts to finish Diane off, but King appears and stops Helbram, who reveals himself as a fairy and King's former best friend.

Helbram uses his magical tree roots to restrain King and inflict brutal lashes on Diane. However, King uses Chastifol to shield Diane from getting hurt. King says that he is fulfilling a promise that he made seven hundred years ago.

The fight continues with Howzer and Guila combining their powers to protect Diane and Guila's little brother from the combined forces of Githunder, Helbram, Dreyfus, and Jericho. Howzer and Guila managed to knockout Jericho and scratch Helbram using their fire tornado attack but Gilthunder and Dreyfus were left unharmed. Howzer and Guila were overpowered and Diane was going to be attacked by Dreyfus when Gowther stepped in. Gowther managed to ensnare Dreyfus in his mind but Dreyfus was able to break out (much to Gothwer's shock) but ended up severley wounded. With Gowther stabbed through the chest and left for dead, Dreyfus retreats with Gilthunder and orders Helbram to finish off the traitors and Diane.

Back in the castle's dungeon, Elizabeth and Hawk try to escape from the castle's dungeon. While trying to find the exit, they come across Elizabeth's older sister Margaret and learn from Vivian that Margaret had chosen self-imprizonment because she was unwilling to abandon Gilthunder. Elizabeth did not believe that and as Vivian was about to get her, Hawk hit her and protected Elizabeth. As Vivian teleported Hawk away and knocked out Elizabeth, Vivian opened Margaret's cell, telling she will grant Elizabeth's wish and that Margaret is free, as long as she have the courage to escape.

King arrives on the scene and asks who had harmed Diane. Upon learning that it was Helbram, he became enraged. The fight between King and Helbram, who was later to be revealed to be a fairy and close acquaintance with King, was brutal. Helbram had wrapped King up in tree roots, forcing King to watch as he made "mincemeat out of Diane". Much to his surprise, King summoned up a powerful shield to protect Diane. Helbram questioned King as to why he would go so far for a half dead girl. To which the latter replied that it was because Diane was precious to him (King) that he could do so.

Retrieved from "https://nanatsu-no-taizai.fandom.com/wiki/Episode_18?oldid=114355"
Community content is available under CC-BY-SA unless otherwise noted.