The Sword of The Holy Knight 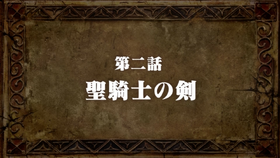 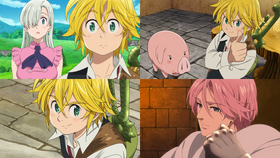 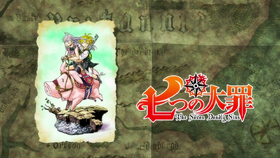 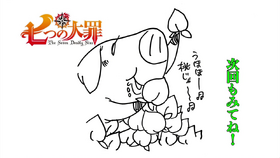 The Sword of The Holy Knight「聖騎士の剣 Seikishi no Ken」 is the 2nd episode of The Seven Deadly Sins anime series.

Meliodas, Hawk and Elizabeth arrive at the village of Bernia, discovering that the underground water source was recently sealed by a Holy Knight named Gilthunder, which was preventing the village from making the Bernia ale, which was their prime source of income. After innumerable unsuccessful attempts of the villagers to pull out the sword with which the source was blocked, Meliodas easily removes it. A celebration is held at the Boar Hat, and Meliodas was hailed as a savior by Bernia's villagers. Gilthunder, wanting to confirm whether the removal of his sword was an accident, threw a spear imbued with his power toward the town. Meliodas, however, easily stops and throws the spear back, destroying Fort Solgales. It is then when Gilthunder realizes that it was Meliodas.

In a flashback about the coup, Holy Knights break into the Liones throne room for the king, while Elizabeth escapes.

In the present, Meliodas makes Elizabeth the Boar Hat’s waitress so she can gather information on the Holy Knights and the other Seven Deadly Sins. Elizabeth asks what sort of crime the Seven Deadly Sins committed to be hated by the public, but Meliodas doesn’t give her a straight answer.

They set up the tavern outside of Bernia Village. Meliodas mentions that they have some of the finest ale, but the trio find out that a Holy Knight has cursed the village to stop their water supply. Gilthunder had stuck a sword in the ground, which can only be removed by another Holy Knight. A child named Mead comes up and says that his friends, the Seven Deadly Sins, could easily fix it. However, the villagers grow angry at his cocky attitude, which had caused the mess. Once they start throwing rocks, Meliodas brings Mead back to the Boar Hat. Meliodas asks Mead what he meant when he said he knew the Sins, but Mead doesn’t answer.

Elizabeth and Hawk return to the Boar Hat, and Elizabeth tells a story about how she, like Mead, was a prankster to get her father’s attention. Mead then confesses that he acts that way because he’s an orphan and an outsider. However, Mead decided to put a bug in Gilthunder's drink because Gilthunder was treating the villagers badly, not because he wanted their attention. He says he lied about being friends with the Sins and just assumed they were the good guys since they were being hunted down by the Holy Knights.

Mead runs off after hearing commotion from the village. The villagers are arguing with two guards who are taking advantage of the knight’s curse. Mead tries to pull the sword out of the ground, while the guards and villagers shout at him. The village elder reminds the villagers that the Holy Knights were the one who insulted their village, not Mead. They finally realize their mistake and try to help Mead with the sword, but are unsuccessful.

Meliodas saunters into the village and nonchalantly pulls the sword out, causing the water to flow again. He throws the sword at the two guards, who run away. The villagers apologize to Mead, and everyone celebrates at the Boar Hat. While struggling with her waitress duties, Elizabeth learns about the Forest of White Dreams, a place so dangerous that not even Holy Knights want to enter.

Back at Fort Solgales, soldiers report to Gilthunder that Meliodas had pulled the sword out of the ground. After hearing the news, Gilthunder throws a spear across 11.7 km (7.3 mi) away toward Bernia Village. Sensing the attack, Meliodas steps outside where Elizabeth is contemplating on the grass. Elizabeth talks through her troubles while Meliodas looks for the spear. Meliodas reminds her that her drive to find the Sins gives her people a chance.

Meliodas catches the spear and is pulled down the cliffside and into various buildings of the village. He redirects the spear right back to the fort, aiming perfectly for Gilthunder’s head. Gilthunder, who moves out of the way, figures out that Meliodas is still alive because of that attack.

Meliodas knows that Gilthunder will be chasing them, so he says they must leave Bernia as soon as possible. Elizabeth suggests hiding in the Forest of White Dreams, and Meliodas says there must be another Sin to find there.

In the forest, a young woman with a serpent tattoo sleeps soundly.

Retrieved from "https://nanatsu-no-taizai.fandom.com/wiki/Episode_2?oldid=149458"
Community content is available under CC-BY-SA unless otherwise noted.