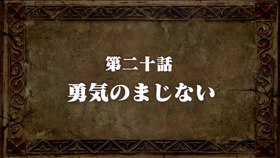 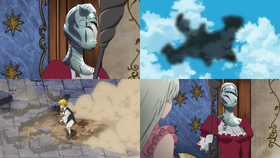 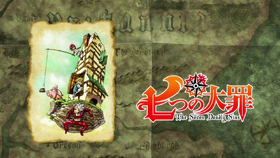 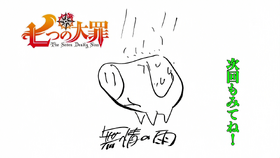 The Courage Charm「勇気のまじない Yūki no Majinai」 is the 20th episode of The Seven Deadly Sins anime series.

Gilthunder leaves Dreyfus to fight Meliodas alone, while Hendrickson deals with Arthur and ultimately defeats him. Meanwhile, Elizabeth wakes up in a chamber and finds her father, King Bartra Liones. Meliodas then finds himself outmatched against Gilthunder, Hendrickson and Vivian.

At the same time, Margaret decides to take her own life by jumping off a castle tower. Margaret and Gilthunder are both released from their curse in the form of monsters, thanks to Meliodas. While Margaret is thus saved from falling, Hendrickson tries to finish Meliodas off, but Gilthunder stands in the way and knocks down Hendrickson at full force.

Vivian tries to trap Meliodas, Gilthunder, Margaret and Arthur in illusionary places, but Merlin, the Boar's Sin of Gluttony, makes her first appearance and breaks the spell.

Meliodas and Hendrickson come face to face. Meliodas asks him to give Elizabeth back to him but Hendrickson says that it isn't possible. They begin to fight each other. Gilthunder remembers when Meliodas helped teach him how to fight. Gilthunder says that he'll never be good enough to become a Holy Knight but Margaret says otherwise. Gilthunder remembers this as he carries the Grand Master Dreyfus. He asks Dreyfus what Gowther made him watch back there and Dreyfus says his greatest sin. He tells Gilthunder to return to the battle and that he'd like to be alone for a while. Gilthunder leaves and is followed by the Mage who tells him that Greyfus is weak and that Hendrickson is the future. The Mage is contacted by Hendrickson and she sees through his eyes that he's facing Meliodas. She sends Gilthunder to help him.

The battle ends up being Gilthunder and Hendrickson vs Meliodas and Arthur. Gilthunder goes up against Meliodas and appears to have the upper hand but Meliodas uses his demonic power to stop him. Hendrickson and Arthur continue their fight but Hendrickson manages to burn Arthur. The flame won't go out until Merlin appears to help him. Elsewhere, the group wonders where Ban is. He's gone and found a secret tunnel that leads downward. Elizabeth wakes up and is in the same chamber as her father. She hugs her father and the Mage warns her to enjoy the reunion while she can because soon Gilthunder is going to beat Meliodas.

Gilthunder remembers when Meliodas was training him and how one time he left for an expedition. He remembers asking to be taken along with him because if he stayed then he'd remain weak. Meliodas asks him what he's supposed to be doing and Gilthunder says protecting Margaret. Meliodas tells him that he can't leave Margaret to go with him. In the present, Meliodas and Gilthunder continue to fight. Hendrickson joins in having defeated Arthur. Hendrickson calls for the Mage to come join them and she leaves Elizabeth but not before telling her that she'll say goodbye to Meliodas for her. Meliodas is outnumbered three to one.

Margaret climbs a tower to get a better view of the battle. In her mind, she begs Gilthunder to stop fighting Meliodas. Meliodas spots Margaret as she jumps from the ledge but sends an attack to her which reveals a monster that he destroys. This leaves him open to attack and he's struck by Hendrickson, Gilthunder, and the Mages magic. Gilthunder remembers the words that Meliodas told him to repeat, "I am now more powerful than any of the seven deadly sins." He turns against Hendrickson and cuts off his arm now free of the curse. Margaret floats down into Arthur's arms. Gilthunder asks Meliodas to let him handle the rest since he can finally take revenge for the murder of his father. Gilthunder attacks Hendrickson and appears to finally destroy him.

Margaret wakes up in Gilthunder's arms. Meliodas thanks Arthur for his help. The Mage is upset and tells them that it can't end this way. Merlin finally steps in and reveals that the Mage is Vivian, her apprentice. Vivian is shocked when she realizes that Merlin is one of the Seven Deadly Sins.

Retrieved from "https://nanatsu-no-taizai.fandom.com/wiki/Episode_20?oldid=139795"
Community content is available under CC-BY-SA unless otherwise noted.