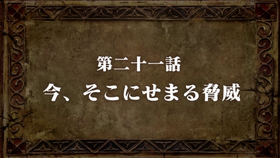 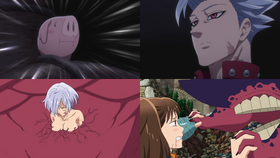 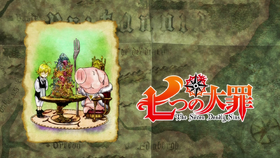 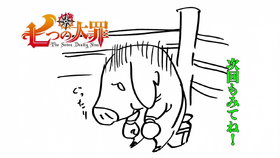 Hawk finds Ban in the catacombs underneath the kingdom, where Ban makes contact with a goddess vessel through the Horn of Cernunnos. Ban is granted the request of resurrecting Elaine, but only with the condition that he kills Meliodas.

Meanwhile, Meliodas, Merlin, Gilthunder, Margaret, and Arthur enter the chamber where Elizabeth and Bartra are being held captive. Merlin takes Arthur and Bartra to Camelot to safety, but Hendrickson soon causes an explosion in the chamber, showing himself embedded in darkness and causing terror in the town with the experimented Holy Knights turned into demons.

After Hendrickson gravely injures Meliodas and Gilthunder with his sword, Elizabeth agrees to go with Hendrickson to stop a bloodbath. When Ban and Hawk find Meliodas, Ban suddenly severs Meliodas's right arm. Upon seeing Meliodas reattaching his arm using dark magic, Ban deduces that Meliodas is from the demon race.

Ban finally finds the Horn of Cernunnos. He asks it to bring back Elaine and to take him instead. He doesn't get a response but Hawk appears and asks him where Elizabeth is. Elizabeth is with her father who tells her that they're going to be separated again soon. He knows this because of his power to see into the future. He tells her that he'll soon be rescued with the help of a crimson boar. Hawk explains to Ban how she came to be down there with the Horn. He tries to get Ban to leave but he says that he has more to do. Suddenly, the horn begins to glow and agrees with him. It tells him that it'll take some time for them to return to their full power, having lost it during the Ancient War. Ban asks if it's true that they grant wishes to anyone. The goddesses tell him that they'll bring Elaine back but not in exchange for his life. Instead, they'll give him a mission. Hawk thinks the whole thing is pretty sketchy but Ban agrees and tells the goddesses that he'll do whatever they want. The goddesses wants him to kill a certain person. Ban asks who it is and the goddesses say that it's Meliodas.

Jericho wakes up to Guila and Zeal kneeling over her. Guila reveals that the Seven Deadly Sins beat them and that there is no need to fight them anymore. Guila asks Jericho to tell her why she drank the demon blood. Merlin asks Vivian where Elizabeth is and she tells them that she's in the King's room. Merlin teleports them to outside the room because Vivian has encased it in a protective spell that can't be broken. Merlin breaks it using Absolute Cancel and Meliodas is reunited with Elizabeth. Dreyfus arrives and asks what's going on. Gilthunder tells him about how he beat Hendrickson in battle and how he wasn't able to repent for the sin he'd committed. Dreyfus asks what sin and Margaret reveals that she knows that the two of them killed Zaratras. She says that she told Gil about it but that Vivian overheard them and put a guard on them so that they'd do her bidding.

Dreyfus admits to the crime but Meliodas asks what that has to do with what's going on right now. Dreyfus says that all this was to start a Holy War. Vivian is upset about losing Gilthunder but a not dead Hendrickson tells her to take back what is hers. Dreyfus tells them that Hendrickson wasn't the same after they committed that murder. Dreyfus says that all he wanted was to be a father that his son could be proud of. Elizabeth reveals that Griamore is alive. The king then removes his title of Grand Master and tells Dreyfus that he'll await sentencing in the dungeon. The King then collapses from strain and Merlin says that she can treat him but that she needs to take him to Camelot. Elizabeth agrees to this after seeing Merlin's boar tattoo. Arthur asks Meliodas for his help back in Camelot but Meliodas says that he'll get to it when he can. Arthur, Merlin, and the King disappear just as the castle blows up around those remaining in the room. Everyone is alright although Dreyfus is missing.

Hendrickson and Vivian arrive at the castle. Hendrickson has awakened the demon blood in the Holy Knights. The Seven Deadly Sins are talking about finding the others when Jericho and Guila collapse. Jericho says that she has no regrets drinking the demon's blood because power is power. She then transforms into a large monster. Diane keeps her occupied with Gowther moves Zeal and Guila out of the way. Jericho isn't the only one to transform into a monster, lots of other Holy Knights have transformed as well. Hendrickson arrives having also taken the demon blood but because he was compatible with it he hasn't turned into a monster although he looks bigger than before. He tells Meliodas to hand over Elizabeth. King attacks him but is deflected by Helbram, who Hendrickson has brought back to life. Helbram attacks King and Hendrickson attacks Howzer. Gilthunder and Meliodas team up to attack Hendrickson but Vivian takes Margaret and Elizabeth captive.

Distracted, Hendrickson can cut Gilthunder and stab Meliodas. Elizabeth tells Hendrickson not to kill them and in return, she'll go with him willingly. Before she leaves, she tells Meliodas to remember the promise he made to her. The promise to continue finding the Seven Deadly Sins even if Elizabeth died along the way. Hendrickson takes Elizabeth away. Meliodas tries to follow but is blocked by Ban and Hawk. Ban attacks Meliodas but Meliodas survives despite losing his arm. Meliodas reattaches it and his demon powers surface. Ban asks Meliodas if he's from the demon race.

Retrieved from "https://nanatsu-no-taizai.fandom.com/wiki/Episode_21?oldid=149467"
Community content is available under CC-BY-SA unless otherwise noted.