What I Can Do For You 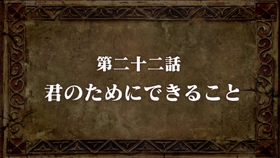 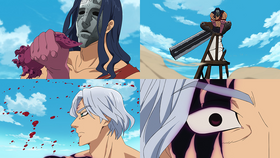 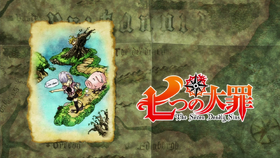 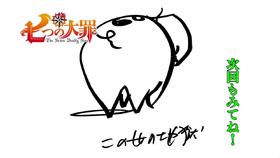 What I Can Do For You「君のためにできること Kimi no Tame ni Dekiru Koto」 is the 22th episode of The Seven Deadly Sins anime series.

Meliodas loses Elizabeth again. Ban confronts the person he must kill in order to save Elaine. Diane and company battle against the New Generation.

Meliodas doesn't respond to Ban's question so the two of them face off. Hawk tells Meliodas about the deal Ban made with the goddesses. This catches Meliodas off guard and Ban is able to hit him. Ban reveals that the goddesses told him everything and how Meliodas was buddies with the guys that killed Elaine. Meliodas returns to normal and tells Ban to kill him. Meanwhile, Diane is still trying to hold back Jericho, Howzer is being pursued by other monsters, and King and Helbram are fighting up above. Gowther is also trying to keep Guila from transforming. Hendrickson and Elizabeth run into Dreyfus. Dreyfus tells him that he's going to atone for the wrongs that he's done by stopping Hendrickson. Ban goes to kill Meliodas but Meliodas attacks Ban. He tells Ban that he can't abandon Elizabeth and that he's not just going to let him kill him. Hawk tries to talk some sense into Ban but Ban says he needs to take this chance to see Elaine again. Hawk tells him that if they're lying then he's going to lose his best friend.

Ban tells them that without Elaine he's living in hell. Meliodas agrees that they can fight after this is all over but for now, they have to do their duty as the Seven Deadly Sins. Ban agrees to this and Meliodas asks Hawk to take him to where Elizabeth is. Ban goes to help Gilthunder and Diane by throwing a Hyper Recovery marble at them. King continues to fight Helbram as he tries to convince him to stop. Helbram tells King to just kill him and that if it's him he'll be fine. Gustaf goes looking for Jericho. She finds him and crushes him with her new hands. She screams at this and begs for someone to kill her. Hendrickson and Dreyfus continue to fight each other. It's a bit difficult for Dreyfus as Hendrickson has a regeneration power now. Both fire magic at each other but it collides and explodes. Hawk is racing towards them with Meliodas on her back. She asks Elizabeth to hold on.

The rubble clears but instead of seeing Hendrickson, Dreyfus sees that Elizabeth has been hurt. He rushes to her side but Hendrickson appears and they continue to sword fight. Hendrickson breaks Dreyfus's sword and proclaims that the fight is over. Gilthunder saves Gustaf from Jericho. Jericho begs Diane to kill her. Helbram begs King to kill him. King summons a sunflower and the beam it shoots out destroys Helbram completely. Ban says that he'll kill Jericho but instead saves her by destroying the demon she'd inhabited. The Seven Deadly Sins regroup and decide to go help Meliodas save Elizabeth. Ban and King, meanwhile, will stay behind and rid the city of other demon monsters. The Dawn Roar arrives and decides to help. Hendrickson melts Dreyfus and he blows away just as Hawk and Meliodas arrive. Meliodas grabs Elizabeth and puts her on top of Hawk and sends them both away. Meliodas and Hendrickson proceed to fight each other. Diane and the gang arrive just in time to help along with the Holy Knights. Meliodas, King, and Diane all attack Hendrickson but he continues to stand up and fight.

Hendrickson knocks Ban into a wall adjunct to them. Ban pulls himself out and asks Hendrickson where he got that and makes it so that the wall comes tumbling down. Inside is a demon and Hendrickson says that that creature is the source of it all.

Retrieved from "https://nanatsu-no-taizai.fandom.com/wiki/Episode_22?oldid=149468"
Community content is available under CC-BY-SA unless otherwise noted.