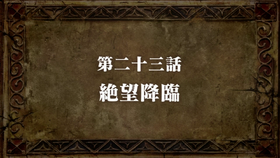 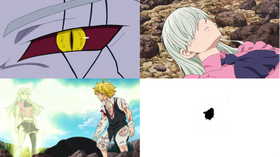 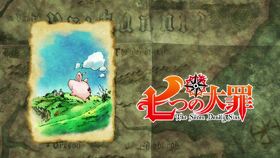 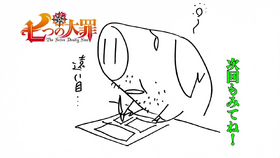 Pursued by the Seven Deadly Sins, Hendrickson makes two finds that give him the ultimate Demon power.

Hendrickson stands before the demon's corpse. The Seven Deadly Sins can't believe it. Gowther tells them that he senses the same magic coming from the corpse as he felt coming from the New Generation. Hendrickson tells them that they discovered the corpse twenty years ago. Hendrickson attacks the Sins by using the power of the red demon. Ban gets impaled by purple tendrils and rushes towards Hendrickson. He tells Hendrickson that he killed the red demon all those years ago as he smashes him into the ground. Ban then uses his nunchucks and destroys the demon corpse. The Sins decide to go down the hole Ban created and leave Diane above to act as a lookout. They follow a trail of blood that leads to Hendrickson. Behind him are the remains of the Grey demon. He takes a sample of blood from the corpse and injects it into himself. It transforms him into a dark grey demon with horns and wings.

Above, Holy Knights begin to question if Hendrickson was behind the attack on the city and if they were behind framing the Sins. Gilthunder says that it doesn't matter because it was the Sins that saved them. Suddenly, there's a blast that sends Diane flying as Hendrickson and the Sins emerge from below. Hendrickson begins to attack the Holy Knights who try to fight back but are killed easily. Dawn Roar jumps in to help along with Gilthunder, Guila, and Howzer but their attacks don't have any impact on Hendrickson. Elizabeth wakes up and begs everyone to run because Hendrickson is too strong. They continue to fight but Hendrickson slaughters them. Meliodas is left standing but he is guarding Elizabeth. He collapses and Hendrickson sends an attack called Dead End that will kill anything it instantly touches. He hurls it towards Meliodas but Hawk steps in the way. He sacrifices himself so that Meliodas can save Elizabeth. Elizabeth throws herself on top of Hawk and begins to wail. Suddenly, a bright light emerges and begins to heal everyone. It's coming from Elizabeth as she has awakened the druid priestess blood in her veins and is an apostle of the goddesses. Outside of the city, a healed Veronica watches the fight.

Elizabeth asks him why he's doing this and Hendrickson says its revenge for them locking away the demon race. Hendrickson does a Dark Nebula attack but Elizabeth says that she won't let him hurt anyone else and produces her own ball of light. It eradicates Hendrickson's attack and heals everyone in the vicinity. Hendrickson is hurt but not enough to stop him. Dawn Roar and the Holy Knights prepare themselves to attack again. Hendrickson somehow makes Gilthunder freeze and goes to attack him but is blocked by Meliodas who punches Hendrickson. This knocks him to the ground and Meliodas says to never give up because the Seven Deadly Sins are here.

Retrieved from "https://nanatsu-no-taizai.fandom.com/wiki/Episode_23?oldid=114360"
Community content is available under CC-BY-SA unless otherwise noted.