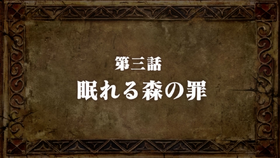 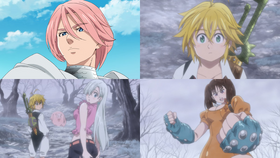 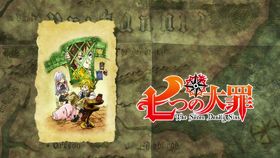 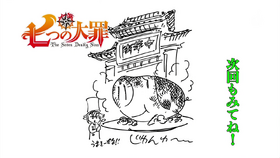 The Sin in the Sleeping Forest「眠れる森の罪 Nemureru Mori no Tsumi」 is the 3rd episode of The Seven Deadly Sins anime series.

Meliodas, Hawk and Elizabeth travel to the daunting Forest of White Dreams, where Meliodas goes to dangerous extremes to obtain information.

Meliodas, Hawk and Elizabeth travel to the Forest of White Dreams that even Holy Knights avoid. There, the Prankster Imps that inhabit the Forest attempt to confuse them by impersonating Hawk and Elizabeth in order to lead them away. However Meliodas defeats them and then he, along with Elizabeth and Hawk, follows them and finds the Serpent's Sin of Envy, Diane sleeping in the forest. Gilthunder suddenly arrives and binds all of them with his lightning magic. Meliodas battles Gilthunder, purposely allows the Holy Knight to slash him, and under the pretense of dying due to the grave wound, acquires information about the whereabouts of two members of the Seven Deadly Sins, King and Ban, as his apparent last wish.

Retrieved from "https://nanatsu-no-taizai.fandom.com/wiki/Episode_3?oldid=114340"
Community content is available under CC-BY-SA unless otherwise noted.