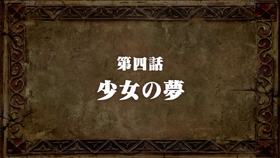 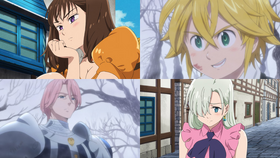 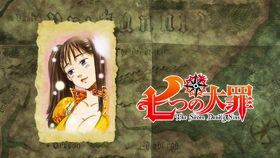 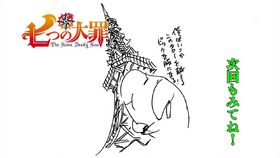 A Little Girl's Dream「少女の夢 Shōjo no Yume」 is the 4th episode of The Seven Deadly Sins anime series.

Diane joins the mission to free Ban from the Baste Dungeon, but the group is assailed by an enemy set on crushing the whole town and the Deadly Sins.

Having discovered the whereabouts of Ban and King, Diane throws Gilthunder out of the forest, and Meliodas, Hawk and Elizabeth, now joined by Diane, head toward the Baste Dungeon, where Ban is imprisoned. They later arrive at Dalmary Town where Meliodas is treated by Dana. Diane and Elizabeth begin to argue and discuss about the aspects in which they envy each other. They are suddenly attacked by the Holy Knight Friesia, who tries to destroy the entire town along with the Deadly Sins, but Diane quickly destroys all of her insects. Concurrently, Ban escapes from his cell in the Baste Dungeon, and is stopped by Jericho, who tries to subdue him. Dana unexpectedly reveals that the medicine Meliodas drank was a deadly poison as Golgius appears out of the blue.

Retrieved from "https://nanatsu-no-taizai.fandom.com/wiki/Episode_4?oldid=123747"
Community content is available under CC-BY-SA unless otherwise noted.