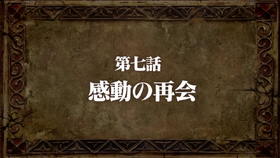 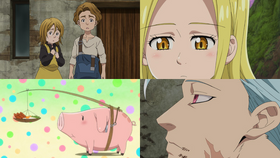 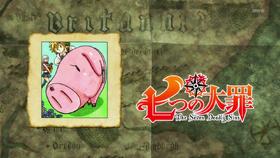 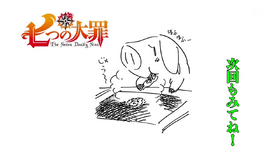 A Touching Reunion「感動の再会 Kandō no Saikai」 is the 7th episode of The Seven Deadly Sins anime series.

Ban, Meliodas and company have finally reunited. Seeking a clue to the location of the Grizzly's Sin of a Sloth, they head to the Capital of the Dead.

Ban wakes up from a dream as Hawk calls everyone down. While they eat breakfast, Elizabeth asks Hawk to tie Meliodas looser but Hawk refuses saying that he'll have more hands than a teenage octopus. Meliodas chooses the gang's next destination to be the Capital of the Dead, where King is rumored to have gone. As they talk more and more about what the Capital of the Dead might hold, Ban falls asleep, and has flashbacks of when he tried to obtain immortality from the Fountain of Youth. His attempts are all but stopped by a mysterious girl who blows him away from the fountain each time. After multiple endeavors, both Ban and the girl are fed up, and eventually start talking to one another. It is then discovered that the forest will die if the water is taken; in which Ban stops all of his attempts. They also introduce themselves, with the girl's name revealed to be Elaine.

Retrieved from "https://nanatsu-no-taizai.fandom.com/wiki/Episode_7?oldid=149463"
Community content is available under CC-BY-SA unless otherwise noted.