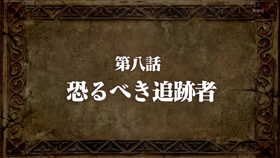 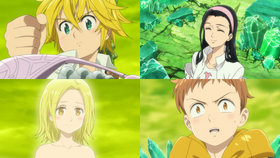 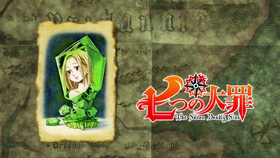 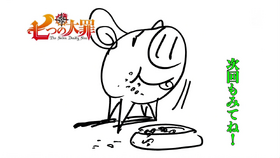 The Fearsome Pursuer「恐るべき追跡者 Osorubeki Tsuiseki-sha」 is the 8th episode of The Seven Deadly Sins anime series.

King and Ban have a final showdown; Holy Knight Guila battles Meliodas, Diane and Elizabeth; Ban remembers Elaine and the Fountain of Youth.

The mysterious Holy Knight, is revealed to be Guila, who threatens the kids and succeeds in gaining entry to the Capital of the Dead. Meanwhile, inside the Capital of the Dead, King petrifies Ban in an act of revenge for his sister, Elaine. However the spirit of Elaine chooses to reverse the petrification, much to the surprise of King. Here, Ban and Elaine's pasts are explored.

Whilst looking for Ban and King, the two now split from the rest of the group to chase after Elaine, Meliodas and the others have a run-in with Guila. The battle begins between Meliodas and Diane fighting against Guila, however tremors from the battle with Guila reach where Ban and King are, forcing Ban to join the fight against Guila. Left alone with his sister now, King listens to her plea to help Ban just as Hawk arrives with Elizabeth, who tries to pull the spear out from the ground to fight Guila. Seeing her determination, King decides to go help the Sins, who are still struggling (even with the arrival of Ban) in defeating Guila.

Retrieved from "https://nanatsu-no-taizai.fandom.com/wiki/Episode_8?oldid=131977"
Community content is available under CC-BY-SA unless otherwise noted.