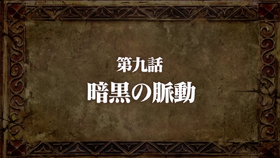 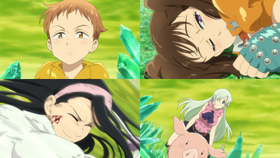 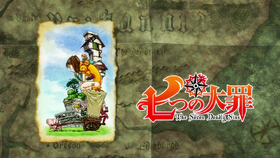 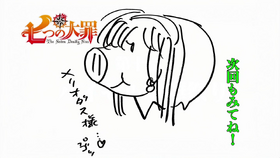 Dark Pulse「暗黒の脈動 Ankoku no Myakudō」 is the 9th episode of The Seven Deadly Sins anime series.

Elaine finally persuades King to rescue Meliodas and the others. Back in the capital, malcontent starts to stir among some of the Holy Knights.

With the appearance of King, the battle comes to a close as he overpowers Guila with Chastiefol. Their time in the Capital of the Dead seemingly up, Ban and Elaine have one more close moment, before being bid a farewell by Ellen and Luigi, who are revealed to have been ghosts this entire time.

Under the guise of summons from Hendrickson, Jericho and Twigo are taken underground and offered power through drinking Demon's Blood, however if they're not compatible with the Demon Blood, they will die. The two accept this despite its risks and drink the demon's blood; Jericho is found compatible, and Twigo not.

Meanwhile, Meliodas and the others arrive at Vaizel for its annual fighting festival, whose grand prize this year is Gideon, Diane's Sacred Treasure. As giants are banned from the festival due to an incident years ago, Diane stays back with Elizabeth for some girl time, while Meliodas, Ban, and King enter the competition to win back Diane's Sacred Treasure.

Retrieved from "https://nanatsu-no-taizai.fandom.com/wiki/Episode_9?oldid=131978"
Community content is available under CC-BY-SA unless otherwise noted.