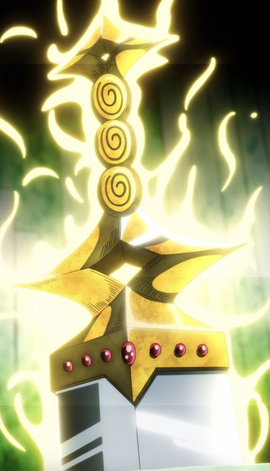 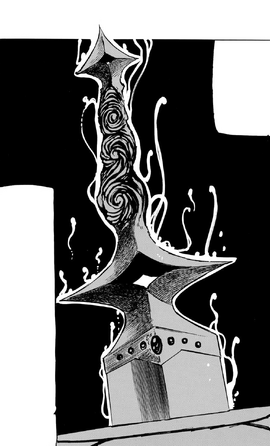 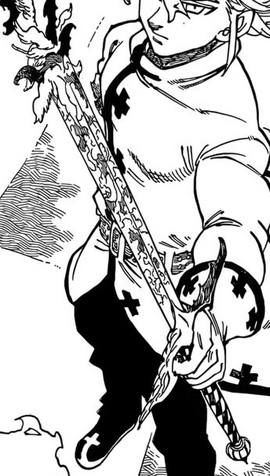 Lady of the Lake

The Holy Sword Excalibur「聖剣エクスカリバー Seiken Ekusukaribā」 is a mighty sword currently wielded by the king of the Kingdom of Camelot, Arthur Pendragon.

Excalibur is a broadsword with a very wide blade. The grip has a dark swirly appearance to it, giving the appearance of a cosmic void. The crossguard has a hollow center and a sharp diamond shape with pointed edges that matches its pommel. The rain guard is adorned with jewels, that emanate with regality.

After awakening Arthur as the King of Chaos, Excalibur acquires a new appareance. The handle is composed of a black and white square design, with a round knob and two small wings under the blade, one white bird and the other black bat. The blade has markings that range between black and white, formed of small black and white wings.

After Arthur absorbed Cath Palug and retrieved the fragment of Chaos he had stolen, Excalibur goes through another transformation, acquiring a single-edged blade with a half circle on top of the handle with four wings.

According to Merlin, Excalibur in the past was just a common sword, given to Carfen, a master swordsman, by the Lady of the Lake[1]. While on the brink of death, he cleansed his sword with his blood and soul. Instead of becoming rusty, the sword became sharper and stronger as it had been infused with Carfen's essence. The blade's next wielder did the same, as did the next wielder of Excalibur. This process repeated countless times over millennia, each knight inheriting Carfen's will and cleansing the sword with their blood in the event of their death before passing it along to its next wielder. After a time, the sword began to choose its wielders, deciding if a person is worthy or not of wielding its might. Excalibur suddenly fell from the sky and was stuck in a huge rock in the Kingdom of Camelot, where people believed that it was a holy sword of God. Many Holy Knights tried to get it out, however, they failed until the appearance of Arthur, who successfully pulled out the sword, and became the new king of Camelot.

After Camelot was taken by the Demon Clan and placed under the control of Zeldris of the Ten Commandments, the demon tried unsuccessfully to remove the sword from the ground where it was stuck.

Sometime later, Arthur decides to infiltrate the castle to retrieve the sword and use it in the battle against the demons. After seeing a wounded Cath and having a conversation with Meliodas, who betrayed his friends, an angry Arthur pulls out Excalibur. Thanks to the power of Excalibur, Arthur manages to avoid the attacks of Chandler and Cusack and cut both in half. Arthur manages to duel against both Zeldris and Meliodas simultaneously, getting the upper hand using various sword techniques transmitted to him by the essence of the previous Excalibur bearers.

However, none of the demons are hurt. Upon realization of this, Arthur falls completely weakened. Cusack tells him that he made a mistake by abusing the power of the sword without having the power to resist the force of the heroes of the past. Before Cusack could kill Arthur, Merlin appears and manages to take Arthur away. However, Cusack uses his Resonant to force Arthur to stab himself with Excalibur.

When Merlin decides to carry out Arthur's awakening, she teleports to Lake Salisbury along the Sins and Elizabeth. Upon putting herself over the lake, Merlin removes Arthur's body still pierced by Excalibur from the Boar Hat. She says that all the preparations are set and asks the "princess" if she is ready, to which a voice from the lake asks if it is finally time to meet their master. As the lake water begins to shine and its light reaches Excalibur, Merlin tells Arthur that she was wrong since the sword was not the one that would kill him but the key to advancing to his new stage. Merlin uses the "key" to unlock the door.

As Arthur is revived as the "King of Chaos", Merlin reveals that Excalibur was the key that awaken Arthur using the magic power that was acumulated in the lake from the Sins's combined attack after defeating the Demon King.

When Cath Palug sucks Arthur, Elizabeth and the Sins to a pocket dimension using the fragment of Chaos he had devoured, Arthur obtains a new form of Excalibur and with it destroys the pocket dimension and also Cath Palug. The Lady of the Lake says that this is the true holy sword that returned to its owner after fulfilling its work as a key. Merlin would later observe that the fluctuating state of Excalibur may be a sign that it has even more room to transform since Arthur's power is not yet perfect.

Arthur later uses Excalibur to fight Cath Palug. After invoking the power of Chaos and absorbing Cath Palug along with the fragment of Chaos that he had stolen, Excalibur transformed again. Merlin denotes that it is the form that denotes that Chaos is completely within Arthur, resembling attributes of the Goddess Clan that shows that Arthur has completely quelled Chaos and his noble heart reflecting in it's positive attributes.

Although many of its abilities are unknown, Excalibur is a magic sword that won't bestow its power upon anyone except the one it has chosen. The source of its power is neither from the Demon Clan or the Goddess Clan. It is a divine sword solely of the Humans, imbued with the souls of all the master swordsmen who've wielded it in past millennia. Arthur was able to use all the sword techniques from the previous wielders to easily overwhelm Cusack, Chandler, Meliodas while in Assault Mode and Zeldris nearly simultaneously with Excalibur.

However, this was only through a surprise attack and due to them not using their full strength. Cusack later revealed that to properly wield Excalibur, Arthur needs both the power and spirit to fully draw out the sword's power and as Arthur lacks the necessary power, eventually the sword will become too heavy for him to wield and his suffered aftershocks of the bestowed power, leaving him too exhausted to move. Also, beings far too strong for even the spirits of the heroes within it to cope can cause them to curl up in fear.

Merlin soon revealed that Excalibur was meant to act as the key to awaken Arthur as the King of Chaos, in which it merged fully with Arthur. It was later summoned in both an initial and final form by Arthur and has proven to be far more powerful than before to where it could slice the dimension that was created by Cath in its initial state before it took on its final form after Arthur devoured Cath and retrieved the other fragment of Chaos. 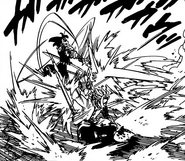 Retrieved from "https://nanatsu-no-taizai.fandom.com/wiki/Excalibur?oldid=152149"
Community content is available under CC-BY-SA unless otherwise noted.