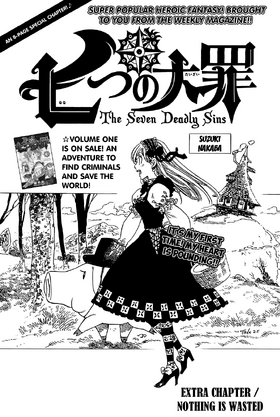 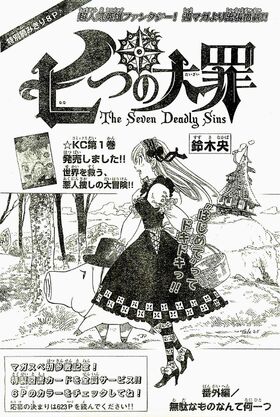 Nothing Wasted「無駄なものなんて何一つ, Muda na Mono Nante Nani hitotsu」 is an extra chapter or omake of the manga, Nanatsu no Taizai.

Meliodas assigns Hawk and Elizabeth to buy some herbs and fruits with the silver coins he hands them, only for them to use up the money on different objects, and ruin the fruits and herbs they are generously given by a shopkeeper.

After having removed Gilthunder's sword in Bernia, Meliodas asks Hawk and Elizabeth to buy some herbs and fruits with the silver coins he hands them, and also for Elizabeth to gain some experience, since she, being a princess, has never seen a silver coin before, having used only gold ones. He also informs them that the day's main dish will be the Dusk Bison that has been acting as a pest and destroying people's farms, to which Hawk retorts that he doesn't prefer beef, since Meliodas' disgusting cooking will be vomited by the customers, resulting him in cleaning up the scraps.

As they start with the fruits, however, Elizabeth is easily distracted with a comb she plans to fix Meliodas' bed hair with, and Hawk, with a plate that has a pig's picture, with them buying the two objects and using up their money and crying for doing so. One of the shopkeepers, recognizing them as one of the village's saviors, sees them crying and generously gives them all the herbs and fruits, which Elizabeth, unfortunately, drops and ruins. Elizabeth blames herself for letting everything go to waste, only for Hawk to dramatically state that nothing was wasted, and eat the ruined scraps himself. After explaining the events to Meliodas, the Deadly Sin comments that the meat of pigs that eat vegetables had less odor and was more juicy, and then "punishes" Elizabeth after finding her comb to be useless by comically groping her.