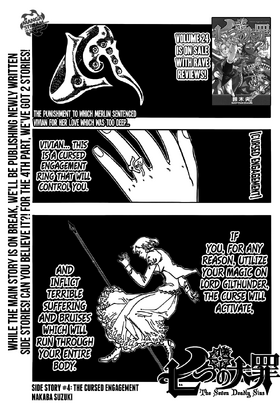 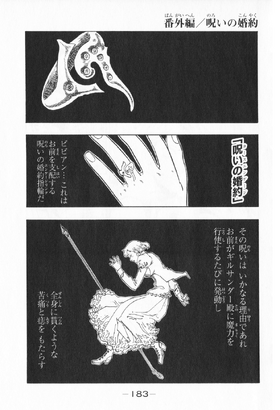 January 11, 2017
The Cursed Engagement「呪いの婚約, Noroi no Kon'yaku」 is the 14th extra chapter of the manga, Nanatsu no Taizai.

Still trapped by Vivian, Gilthunder begs her to be released and until he recalls her engagement curse by Merlin but it proves futile as Vivian is able to overstand her hellish pain even when Gilthunder tries to control her.

As Vivian is sleeping, she recalls her master Merlin's Curse Engage and its effects like a nightmare pain everytime she tries to use magic on Gilthunder and her inminent demise once all the bruises cover her body entirely.

She suddenly wakes up, throws up and notes she has no much time left when she open her dress and see the bruises are now covering her body from toe to breasts. She blames Merlin as she tries to take off the ring but she can not and recalls Merlin's indications. Gilthunder enters the room, he seems relieved seeing her awaken. Vivian believes he is worried about her but he assures he is desperate instead as he could not find any exit or window and begs her to be released already. He asks her where the hell they are and she confess it is her secret spot no one else knows.

Vivian tries to kiss Gilthunder but he tosses her away. Vivian insists is too late, as most of Liones' habitants most likely were killed already by the Ten Commandments, including Margaret. Gilthunder, recalling the engagement curse activating word: Remada, pronounce it, making Vivian writhe in pain on the floor. Gilthunder, trying to intimidate her, reminds her she is now under his dominion but for his shock, a delusional Vivian encourages him to keep dominating her, and that they should build their little kingdom there where he could be the king and she the slave, while Gilthunder gaze at her completely horrorized.

The Last Page of Extra Chapter 14