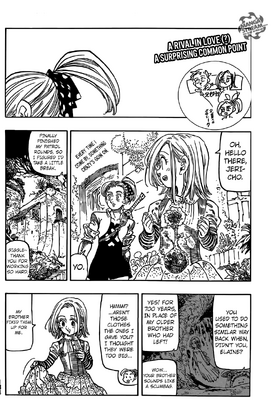 Sister「妹よ Imouto yo」 is the 19th extra chapter of the manga, Nanatsu no Taizai.

Jericho meets with Elaine who is practicing her magic. They both talk about how way back 700 years Elaine used to work hard as the Fairy King's Forest Holy Maiden due to her brother King dissapareance. Jericho believes that makes King a jerk and says brothers tend to be cold toward their sibblings. She notes Elaine is wearing the dress she gave to her but now is smaller thanks to King "fixing" it. Jericho talks about how cold and bossy Gustaf was as he always told Jericho, she should give her best as a woman or otherwise she would never get a husband.

Elaine agrees with Jericho staments of brothers, but she also says they do care about their sisters; Jericho wonders if Gustaf was like it and Elaine says she is sure about it and the proof is she now can use his same ice magic. Jericho asks her is she thinks he is watching over her, to which Elaine replies she does but he also looks upset as he is behind her. As a side of effect of her being in a state between live and death she can see Gustaf ghost who is standing behind her with his arms crossed and clearly annoyed. Elaine keep quoting Gustaf arguing he is mad at her "because she have so much free time to waste talking about pointless stuff instead of training".

Shocked Jericho leaves immediately in order to go training again as Elaine is surprised to see she is leaving to soon. She then gaze at Gustaf who encourages his sister.

The Last Page of Extra Chapter 19

Retrieved from "https://nanatsu-no-taizai.fandom.com/wiki/Extra_Chapter_19?oldid=149964"
Community content is available under CC-BY-SA unless otherwise noted.