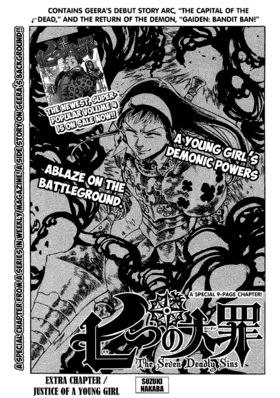 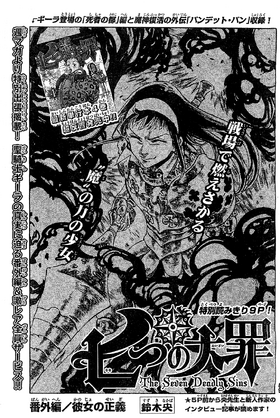 Her Justice「彼女の正義, Kanojo no Seigi」 is an extra chapter or omake of Nanatsu no Taizai.

Guila headed to her house to see her little brother Zeal and found out that he was being bullied and beaten by grown men due to their hatred for their father. Their father was a Holy Knight in the past, but he apparently fled from an important battle in fear. Guila treated Zeal's wound and promised him that she would do anything for him. Later that night, Guila armored up and killed the three men for bullying Zeal. She then headed to the castle to meet up with Jericho and Marmas, and got Hendrickson to head to Vaizel.

In a town near the castle of Liones, Guila, in casual attire, asks her brother, Zeal, as to how he received a bruise on his face. Ignoring her question, he instead questions her when she returned, and whether she had her hair cut, commenting that her hair is very cute now, to which she thanks him. As she huge him, she tells her not to work very hard, not to lose to the Seven Deadly Sins, and to not hurt herself. As she apologizes, since Zeal is always hurt due to her leaving him back, she catches a stone thrown by three men towards him, who call the two "disgraces of Holy Knights". The boy relies to his sister that though their father went missing during a mission, which lead to many deaths, he believes in him. When he asks if she became a Holy Knight due to the same reason, she answers that she became one to protect Zeal, and be someone whom he could be proud of.

Zeal replies that he is fine by himself, which leads Guila to notice multiple bruises on his hands, and kiss him on his forehead. In the middle of the night, as Zeal sleeps, Guila puts on her armor. Stating that that she will do anything for him, she proceeds to kill the men who have been attacking Zeal, while they are planning on how they will attack him next, even proposing to burn his and Guila's house. Sometime later, Hendrickson instructs Marmas, Jericho and Guila to leave for Vaizel, with their enemies being Meliodas, Ban, Diane, and King, one of whom possesses a Sacred Treasure.