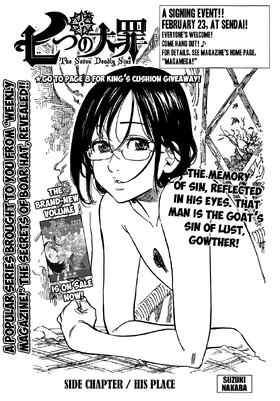 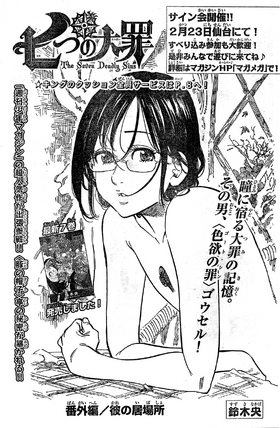 Where He Belongs「彼の居場所, Kare no Ibasho」 is an extra chapter or omake of Nanatsu no Taizai.

Gowther wander around the Boar Hat to find his own place to stay and sleep as Meliodas wonder what kind of job he should take.

As the Boar Hat was being closed for the night, everyone went to their own room to sleep for the night, but Gowther wander around to find his own room. Gowther found Hawk still in the kitchen area as he reveal that Hawk sleep here and told him to go up. Gowther went to Elizabeth's room to find out that Meliodas also sleeps there and he says that he sleeps there to protect her, but tied up because of Hawk so he doesn't touch her during the night while Meliodas called it role-playing. Meliodas told Gowther to go higher because he has something for him. Gowther found King and Ban's room where King is trying to get his Sacred Treasure Chastiefol back because Ban is using it as a pillow.

Gowther asks King why he sleeps is a hammock where King reveals that he like to see the stars, but Gowther looks out and see a nice view of Diane as she sleep where King blushes and told him that he wanted to protect her. King told Gowther to go up to the storage room as Gowther found Meliodas' strange book and start reading them over night, making the storage room his own. The next day, Gowther act in a different personality and use what he read from the book to everyones surprise.