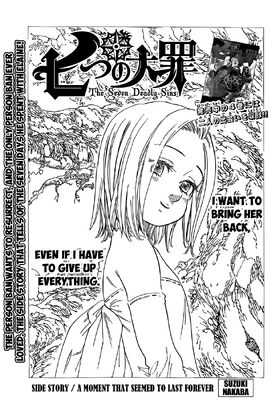 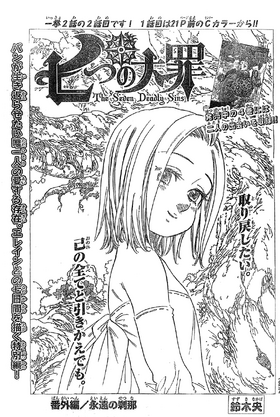 Eternal Moment「永遠の刹那, Eien no Setsuna」 is an extra chapter or omake of the manga, Nanatsu no Taizai.

Prior to Elaine's death, Ban and Elaine intimately discuss about greed that exists within humans.

In the Fairy King's Forest, Elaine asks Ban why humans are always filled with greed. He initially responds by stating he has no idea, but continues to rhetorically explain that a hungry person will desire food and a cold person will want warm clothes. However, Elaine continues to ponder why humans cannot simply live every day peacefully and be satisfied with what they already have. Ban lifts her up in the air, briefly alarming her and prompting her to think that he is a weird human. He realizes what she was thinking in her mind, surprising her and causing her to wonder whether he was also able to read people's heart. He dismisses the idea and states that he was merely reading her expression. Ban continues to explain that humans die so quickly, and in comparison to Fairies, it is only like a moment's flicker. He further suggests that greed is due to human lives being relatively short, hence people will want to prove their existence or accomplish a dream they are willingly to risk everything for.

Elaine grabs hold of Ban's Ale Label Collection and asks whether it is something he would throw away his life for. He dismisses the idea, and states that he has not yet found something of such value. Since Elaine refuses to return his collection book, Ban sneaks behind her suddenly and takes the book back. Having knocked her off balance, they both roll over. Ban apologizes for surprising her, only noticing her blushing and asking him to guess what is she thinking. After staring for a while, Ban replies stating that he has never seen a similar expression before, causing her to flush even more and comically smack his head.