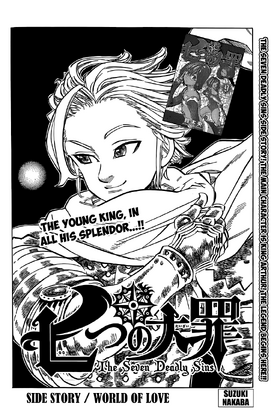 A Completely Changed World「一変する世界 Ippen suru Sekai」 is an extra chapter or omake of the manga, Nanatsu no Taizai.

Arthur is rescued by a man named Bartra Liones who tells him that he will become a king in the future.

In Camelot, a country located in southern Britannia and east of the capital, a young Arthur Pendragon is forced to split an apple at the cliffs whilst blindfolded. He easily splits the apple with a branch, accomplishing the tasks and subsequently making his brother Kay furious. Angered, Kay throws his sword at Arthur causing him to fall. Suddenly, whilst Kay was still smirking, a mysterious man appears and saves Arthur from his fall. The latter quickly thanks the man he presumed to be a Holy Knight, and begins to introduce himself. To his surprise, the man had already known his name and was curious why Arthur remained so composed and calm. Arthur informs him that he had a feeling that he would be alright, and explains his relationship with Kay. The man asks him whether Kay made him fall of the cliff on purpose, to which Arthur agrees but hopes that they will one day understand each other as respectable Holy Knights. The former notes that Arthur possesses great character and is born to become something great, stating that he will become a king in the future. Arthur is slightly disappointed, and the man finally introduces himself as Bartra Liones, the eleventh king of the Kingdom of Liones.

Retrieved from "https://nanatsu-no-taizai.fandom.com/wiki/Extra_Chapter_5?oldid=149970"
Community content is available under CC-BY-SA unless otherwise noted.