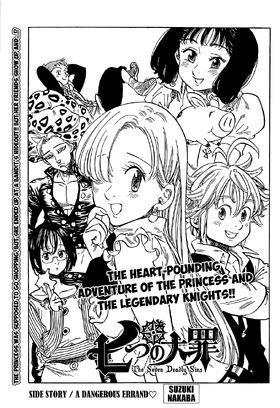 A Dangerous Errand「キケンなお使い Kiken na Otsukai」 is an extra chapter or omake of the manga, Nanatsu no Taizai.

Elizabeth, under Meliodas order, was sent out to the deep forest in order to find ingredients for the bar, but Elizabeth was unknowable taken hostage by a group of bandits.

Inside a hideout on top of a hill, Elizabeth was taken hostage by a group of bandits as she search through the forest to find ingredient for the Boar Hat. Elizabeth, however, didn't realize she was taken and believed she was in a bar to the bandit annoyance. When the door knocked in their hideout, the bandits were scared, thinking it was trouble until it was revealed it was Hawk who came to find Elizabeth much to the bandit confusion until they grow shock to hear Hawk speak. Then Ban appeared, claiming to find a location to skip work much to Hawk annoyance until King appeared and stabbed Ban for skipping work. While the bandits were disbelieve on Ban being immortal and King floating, Diane appeared and nearly step on Ban and King for skipping work, but was happy to know Elizabeth is safe. However, due to Diane stomp, the hideout started to break and fall down the hill which Diane chase after it while Gowther appeared, doing a pose and claim to find them under Meliodas ordered until he realize they were gone.

Meliodas discover the sliding hideout and destroyed it with Liz's Sword, but in the same time saved Elizabeth while saying she is a handful. The bandits were shocked to not only to the events, but to realize that the group are the legendary Seven Deadly Sins as the group head back to Boar Hat, without getting the ingredient.

Last Page of the Extra Chapter 6

Retrieved from "https://nanatsu-no-taizai.fandom.com/wiki/Extra_Chapter_6?oldid=149971"
Community content is available under CC-BY-SA unless otherwise noted.