The Fairy Clan is one of the five major races in the world of Nanatsu no Taizai.

According to the Lady of the Lake, the Fairy Clan and their realm were created by the Sacred Tree, after this was given birth by Chaos.[1]

Over 3,000 years ago, the Fairy Clan along with three of the other four major races (humans, giants and goddesses) defeated the Demon Clan. They were victorious and used the Coffin of Eternal Darkness to seal away the Demon Clan. The Fairies lived peacefully in the Fairy Realm and protected the Fountain of Youth in the Fairy King's Forest until their home was destroyed by a Red Demon, leaving them scattered and homeless.

Fairies have a variety of different appearances. Almost all fairies possess a pair of pointy ears and wings, with King and Elaine being the only known exceptions. Their wings resemble those of insects with several visible veins. Their appearance does not change much throughout their lives, keeping in many cases a child-like appearance.

Fairies are naturally born within nature, specificly from flowers and trees. The average lifespan of a fairy is between 1000 to 1500 years.[2] They do not appear to physically age and they never suffer from illness. Even after death their bodies do not decompose and rot.[3]

Fairies do not have wings at birth, they are growing gradually throughout their lives. Having its wings fully grown is a symbol of maturity, and in occasions this is accompanied by an increase in magical power and a slight change in appearance. Fairy wings are believed to be able to make medicine that extends one's life, hence they have a very high monetary worth.

The fairies are known to be a very powerful race, notably King and Helbram who are as strong as a Great Holy Knight. Members of the Fairy Clan are capable of controlling and manipulating roots and branches of the Sacred Tree, using them in combat. Their magic is linked to the Sacred Tree itself and in a certain way to their wings, once the wings of a fairy grow in maturity, the power of a fairy reaches greater heights. They also share several supernatural abilities amongst their kind: 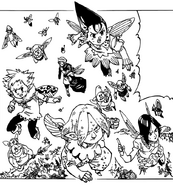 Fairies killed with their wings ripped off

Fairies killed with their wings ripped off

Fairies watching the Forest in danger