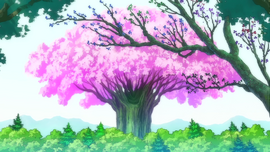 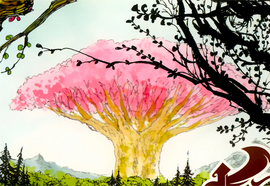 The Fairy King's Forest, later relocated and renamed as the New Fairy King's Forest after the destruction of the original, is a forest within the Fairy Realm and the Human Realm. It marks the border between both realms. Before it was completely burned down due a Red Demon's purgatory flame, the blame of which was placed on Ban, the fairy nation was an ally of the Kingdom of Liones.[1]

The Fairy King's forest (and by extension, the entire Fairy Realm) is ruled by the Fairy King, who is chosen by the Sacred Tree.

The Fairy King's Forest is home to the Sacred Tree of the Fairy Realm which lies in the center of the forest, the fairies all live in the sacred tree which acts like a portal between the human realm and the fairy realm. It is surrounded by a barrier that can be manipulated in order to keep out certain individuals.[2]

The Forest, along the rest of the Fairy Realm, was created by the Sacred Tree, after this was given birth by Chaos.

3,000 years ago, during the Holy War, the Fairy King's Forest was used as the location of the Light of Grace, Stigma's headquarters. The forest was protected by the first Fairy King, Gloxinia, until he joined the Ten Commandments and was later sealed along with the Demon Clan. The forest was destroyed after this, leaving its ruins below where is now the castle of the kingdom of Liones.

At some point, a second fairy king, named Dahlia, was chosen to reign.

700 years before the series started, the Fairy King Harlequin, who had ruled the forest until then, abandoned the kingdom[3] to rescue some captured fairies which included his best friend Helbram, forcing his sister to protect their country's greatest treasure, the Fountain of Youth, in his place.[4] According to Elaine, many people sought out the Fountain of Youth and attempted to attack the fairies' country but all were thwarted by Harlequin.

700 years later, after an attack from a Red Demon which destroyed the original forest, the forest was relocated to the west of the Forest of White Dreams by Ban, who planted the seed of the forest there.

When Ban heard legends from his friend Zhivago about the Fountain of Youth, Ban went on a journey to find the Fountain to become immortal. While climbing up the mountain, Ban found a little girl but ignores her and found the Fountain. Ban asked the little girl who she was and it was revealed that she was the Guardian Saint protecting the fountain and her name was Elaine. After Elaine saw that he had no malicious feelings, they bonded and became very close.

After Ban heard that Elaine wanted to be taken by him, Ban promised to her that he would find her brother and set her free which she was happy about but, then a Red Demon came into the forest and started burning it down. Ban tried to fight the demon by ripping one of its hearts out but Elaine explained that demons have more than one heart. She was then clawed through by the demon, and so was Ban, and this gave both of them a fatal wound. Elaine gave the fountain to Ban so he could live but he refused and Elaine made him drink it mouth to mouth and it gave him his immortality, which allowed him to kill the demon, but the forest was still burnt down and he was blamed for its destruction.

Ban and King travel to the New Fairy King's Forest with Jericho tagging along and soon discover the forest was restored. Fairies are reappearing, but when the fairies - Cisca, Ende, and Melik - notice King, they immediately became frustrated about him leaving the forest with Elaine dying protecting it from the Red Demon. They honor Ban by recognizing him as the new Fairy King, for saving their home by planting the Almoca Seed entrusted by Elaine.

After spending some time there, King discovers that Ban fed the forest with his blood allowing grow increasingly, which has already cast in the past. Before all decide to leave an Albion appears to attack the forest. While Ban is incapacitated due to Gerharde and all the fairies fleeing for their lives, King decided to protect the forest. However, none of the attacks of Chastiefol effect on Albion who injures King and damage the Sacred Tree arise. As a last resort, King invokes the true form of Chastiefol, destroying Albion and knocking him unconscious.

The damage to the Sacred Tree is restored with Ban's blood, as well as this healed King's injuries.

During the invasion of the Ten Commandments on Britannia, the Fairy King's Forest is kept safe from any attack by the demons thanks to the barrier that keeps them away. King, Diane and Matrona decided to move there after the events in Vaizel. However, as ancient fairy and giant kings, Drole and Gloxinia manage to detect the forest and break through its barrier, abducting King and Diane. However, their intentions are to test both in order to determine the correctness of their past elections. In the end, Diane and King manage to pass the test, making Drole and Gloxinia see the error in their actions. With the leaving of the Sins, Gloxinia takes King's place in protect the forest.

After Gloxinia's death, the Fairy King's Forest is finally attacked by the Demon Clan, but is protected by Matrona, Gerheade and the others giants and fairies.

An Almoca Seed from the forest. 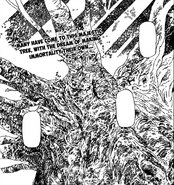 Retrieved from "https://nanatsu-no-taizai.fandom.com/wiki/Fairy_King%27s_Forest?oldid=141425"
Community content is available under CC-BY-SA unless otherwise noted.