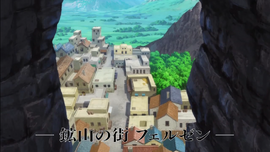 Fersen「フェルゼン Feruzen」 is a mining district located to the north of the Kingdom of Liones and north-east of the New Fairy King's Forest.

Fersen is a mining and armor-making district situated north-west of the Forest of White Dreams. Fraudrin, as Dreyfus, once came to this district three years ago with Griamore to buy a set of armor for the latter's knighting ceremony.

Fraudrin arrives at Fersen after Meliodas's attack on Galand, looking for souls to devour to replenish his magic. Once there, he is ambushed by the Pleiades of the Azure Sky. Knocked unconscious by Waillo's strike, he is then captured and brought to Zeldon's Research Facility.

Retrieved from "https://nanatsu-no-taizai.fandom.com/wiki/Fersen?oldid=98407"
Community content is available under CC-BY-SA unless otherwise noted.