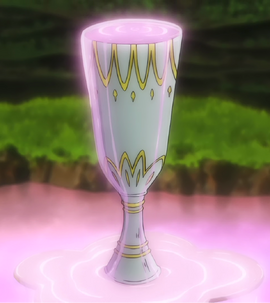 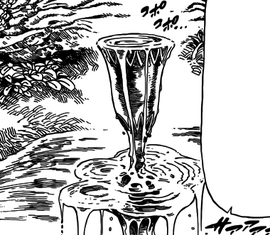 Side Story 1
Fountain of Youth is a sacred treasure of the Fairy Clan that grants anyone that drinks it eternal life.[1] Its water was drunk by Ban,[2] who gained its immortality and became known as "Undead Ban".[3]

After Elaine's temporary life had ended, Ban sacrified his immortality by infusing the life force of the fountain into Elaine to permanently bring her back to life.

The creation of the fountain is unknown, but it is believed that licking the water will grant ten years of extra life, swallowing the water will grant hundred years, and drinking it all will grant eternal life and immortality.[4] King was once its guardian saint, before he abandoned the kingdom,[5] resulting in his sister, Elaine becoming its guardian.[6] Without the fountain of youth, the Fairy King's Forest will die out.[7]

The fountain is first seen when Ban, desiring immortality, climbs the gigantic tree in the Fairy King's Forest where the fountain is located, only to be repeatedly prevented from doing so by Elaine. Both annoyed by the other's actions, Ban then tries to grab the cup from a distance by utilizing his skills in manipulating his three-section. He almost succeeds in drinking the water, but is stopped at the last minute by Elaine, who immobilizes him using her ability to control the trees' branches. She, however, soon realizes that Ban possess no malicious feelings and unbinds him, soon befriending within a week.

Later, when an unnamed demon, who was from the Demon Clan, probably desiring immortality, starts burning the forest with its purgatory fire, Ban tries to kill it after instructing Elaine to take the fountain and escape. However, his attempts are unsuccessful, and the demon mortally wounds both of them. Since Ban did not have the strength to even drink the water, Elaine first drinks it, and then makes him drink it with a kiss. Ban, having now gained immortality, angrily and quickly kills the demon.

After drinking it, the essence of the Fountain of Youth became part of Ban's blood. Thanks to this, Ban was able to feed the Almoca Seed delivered by Elaine with his blood and make it bloom in a new Fairy King's Forest.

Retrieved from "https://nanatsu-no-taizai.fandom.com/wiki/Fountain_of_Youth?oldid=154647"
Community content is available under CC-BY-SA unless otherwise noted.