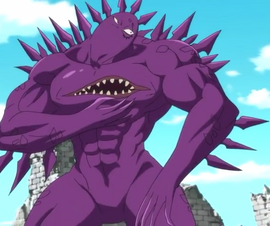 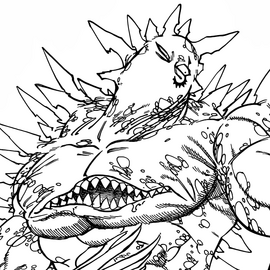 Fraudrin「フラウドリン」 is a demon who has been using the Great Holy Knight Dreyfus' body as a vessel for the past 10 years. He is a secondary antagonist of the Kingdom Infiltration arc, having conspired to resurrect the Demon Clan with the help of Hendrickson. Although he is a member of the Ten Commandments as the Selflessness,[2] he considers himself a stand in for the missing original member.[3]

While possessing Dreyfus, Fraudrin's appearance is that of his host, with a curved demon mark across his left eye.

His true form towers over humans, his back is covered in spiky protrusions and scales, and his mouth is on his pectoral muscles instead of his face. His fingers are long and sharp, and by clasping them together he can use his hands as spears. He has hand-shaped feet.

Fraudrin is a manipulator by nature who enjoys toying with other people's emotions. He is very patient, waiting for years before initiating his plans to get revenge on Meliodas and to revive the Demon Clan, only moving when the time is right.

He enjoys being inside of Dreyfus' body but worries that being inside of a human has made him soft. Those concerns later prove to be true, as Fraudrin hesitates to kill Dreyfus and Hendrickson when he hears Griamore shouting for his father, showing that Fraudrin grew attached to his life as a human. When he threatened to kill Meliodas by self-destructing, he ultimately could not bring himself to do it since Griamore would be caught in the explosion. After death, Fraudrin gave his magical ability Full Size to Dreyfus to help him protect his son.

Fraudrin used to be a high ranking general within the Demon Clan and fought in the ancient Holy War against the Goddess Clan and the other races (humans, fairies and giants).

Fraudrin was shown talking to Gowther sometime after Meliodas's betrayal, expressing disbelief and wondering if Meliodas was running away from the battle. Gowther rebukes him, saying that rather than running away, Meliodas did what he did out of love. When Gowther asks if Fraudrin can understand that, Fraudrin replies in the negative.[4]

When the Archangel Ludociel took hostage to a horde of demons, Fraudrin accompanied the members of the Ten Commandments Galand, Derieri, Monspeet, and Melascula along with an army of demons to the Fairy King's Forest in order to rescue them. There, they are confronted by the goddess Elizabeth who tries to give a peaceful exit to the situation, only so that the extermination of all the hostages and all the demon army ended up unleashing a battle between the Commandments and two of the Four Archangels. During the battle, Fraudrin tries to support Monspeet against Sariel, only to end up being defeated by Ludociel. When Derieri and Monspeet use their Indura Transformation, Galand flees the battle along with Fraudrin.

After Gowther left his place in the Ten Commandments and later died, Fraudrin took his place as the Selflessness.

At some point, Fraudrin was sealed away by a Goddess during the Holy War, before the rest of the Demon Clan was sealed. [5]

Fraudrin escaped the seal after the people of the Kingdom of Danafor broke it[6], and begun to plot the resurrection of his clan.

Fraudrin assembled the pieces of the Coffin of Eternal Darkness with the help of a wizard who worshiped the demons. However, the seal of the Coffin would only be undone with the blood of a goddess. Since the Goddess Clan had disappeared, Fraudrin tried to use the blood of Danafor's citizens to perform the ritual to open the Coffin, releasing monsters from the underworld that led Danafor to be devastated. However, the ritual failed since no matter how much human blood he offered, it could never replace the blood of a goddess. However, finding Liz, Fraudrin recognizes her as the reincarnation of the Goddess Elizabeth and that with her blood, he could complete the ritual.

He was responsible for the murder of Liz and had incurred the wrath of Meliodas that left the demon nearly dying in the aftermath of Meliodas' rage that caused Danafor to be destroyed.

When Hendrickson and Dreyfus are investigating the remains of the kingdom of Danafor on King Liones' order, it is shown that he is present in the large hole that was once the kingdom. Upon hearing Hendrickson and Dreyfus talk about their future wishes, Fraudrin asks them to let him possess them so that he can grant those wishes. When refused, he tries to take over Dreyfus by force, but he fails and takes over Hendrickson instead. Dreyfus, unable to fight his student and friend, allows Fraudrin to possess him, also having Hendrickson under his control. He then returns to the kingdom, plotting the death of Zaratras and framing the Seven Deadly Sins for it.

After having Dreyfus and Hendrickson kill Zaratras, Fraudrin led the Holy Knights against the framed Seven Deadly Sins, but reacted with shock when he felt Meliodas' wrath building.[7]

Over the years following the murder of Zaratras, Fraudrin would occasionally take full control over Dreyfus' body, leading to him bonding with his son Griamore.

As a member of the Ten Commandments, Fraudrin is exceptionally powerful. Like all members of the Demon Clan, he is able to utilize the mysterious jet-black matter as shown by forming wings for flight. His aura, combined with the aura of the other Ten Commandments is so terrifying that it made the normally calm Hendrickson sweat in fear by their presence and unnerved Meliodas when he felt it from several kilometers away.

Though he was apparently not the first choice, the fact that he was chosen to take a missing spot in the Ten Commandments speaks to his power. While walking away from Denzel and Deathpierce, he assures the former he could have easily beaten him, even with his magic restrained and produces a terrifying aura to make this point clear.[8] However, Meliodas stated that Fraudrin isn't truly worthy for the title of one of the Ten Commandments, describing him as being a cheap replacement of Gowther, something proven when he was the easiest one to defeat.

Fraudrin possesses immense durability, as he emerged completely unscathed after being hit by Tarmiel and Sariel's Omega Ark.[9] He also managed to endure some of Meliodas' attacks when the latter was using his true power in order to initiate a self-destruction attack.

While inhabiting Dreyfus' body, he has access to his power Break, and frequently uses his techniques.

Despite being a member of the Ten Commandments and given the title as the Commandment of Selflessness(|無欲|むよく|Muyoku), Meliodas states that Fraudrin never received the commandment from the Demon King, and was nothing more than a substitute within the Demon King’s elite troops.

Retrieved from "https://nanatsu-no-taizai.fandom.com/wiki/Fraudrin?oldid=155303"
Community content is available under CC-BY-SA unless otherwise noted.