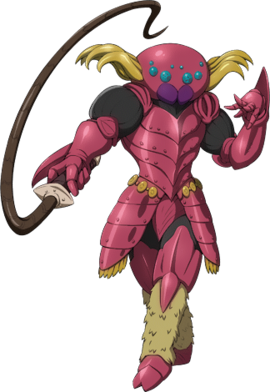 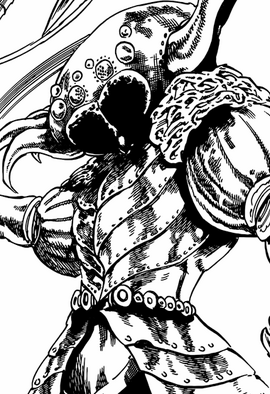 Friesia「フリージア」 is a Holy Knight with the ability to manipulate insects. Belonging to the infamous Weird Fangs stationed at Baste Dungeon, she aided in the capture of the Deadly Sin, Ban.

Full Appearance
Friesia without the armor
She has a slim curvaceous figure, long hair and dark eyes. She wears a leotard.

Her helm resembles a spider with 8 eyes, 8 legs, and a mouth. Her gauntlet has sharp finger tips and a piece that extends, resembling like a blade. She also carries a bladed, dual tailed whip.

Friesia is a relatively calm person. She does not care about the lives of others and is willing to destroy a town and its citizens just to defeats her enemies. Her way of laughing is "Dofufufufufu".[1]

However she was revealed to have a relatively short temper when Ruin outright revealed their identities as Holy Knights to their pursuers despite her painstaking efforts of laying low much to her frustration and later on, angrily berated the townsfolk for following a Demon and betraying her to one of them.

Five years before the beginning of the series, Friesia and the three other members of the Weird Fangs confronted Ban of the Seven Deadly Sins. The resulting battle ended in Ban's capture and imprisonment in Baste Dungeon, where Friesia remained as one of the dungeon's four guardians.[2]

At Baste Dungeon, the guards guarding Ban's cell in Baste Dungeon comment that the Weird Fangs, including Friesia, will protect them.[3]

When one of the insects she uses to reconnoiter finds Meliodas and Diane, Friesia decides to launch the first strike and kill them[4], and attacks Dalmary Town with her instructs, aiming to destroy the town along with the two. She is then surprised when Diane destroys her insects.[5] After she and Ruin finished preparing for the Deadly Sins, the both encounter Golgius when she returns to the Baste Dungeon.[6]

Sometime later, she watches as Meliodas and Diane battle one another, leaving to prepare her part of the plans.[7] Showing herself to Elizabeth, she attacks a young boy that she was protecting, with her insects, and appears to be shocked when Elizabeth enters her insect swarm to protect the boy.[8] When Ruin disburses his disguise as the young boy and starts to attack Elizabeth, Friesia tells her fellow Holy Knight that it would be bad if the princess dies.[9] After Elizabeth breaks Ruin's spell and she is defeated, Friesia is beaten to the ground by Diane with her armor nearly destroyed.[10]

Friesia and Ruin are on the run from the Ten Commandments. Finally, they are caught and Ruin's soul is devoured by Fraudrin. She tried to escape but is grabbed and locked down by the villagers. She screams and pleads for mercy but nothing stops Fraudrin from devouring her soul, and the villagers cheer as they can live in peace for the next three months.

Friesia, like all other Holy Knights, have magic imbued within their bodies. As a Holy Knight, Friesia possesses immense strength and ability. She also possesses an ability to manipulate insects and freely control them with her whip.[11]

Friesia wields a bladed, dual-tailed whip into battle.[12] She has demonstrated to be quite skilled in its use; being able to maneuver it dexterously, and is often seen swinging it in excitement.

Friesia and Golgius are both members of the Weird Fangs. They seem to be on good terms with each other as shown playing chess together in the anime.

Friesia and Ruin are members of the Weird Fangs. She is also willing to partner with Ruin in order to destroy the Seven Deadly Sins. She even called Ruin 'old man'.

Friesia and Jude are members of the Weird Fangs. They don't interact much at all.

Friesia and Jericho are in good terms with each other superior and subordinate. It appears she had fondness on Jericho, assuring her of Baste Dungeon's defenses when the Apprentice Holy Knight expressed doubts if the fortress will hold out against the Sins' assault to rescue Ban in the anime.

Retrieved from "https://nanatsu-no-taizai.fandom.com/wiki/Friesia?oldid=139367"
Community content is available under CC-BY-SA unless otherwise noted.