Episode 1
Full Counter「, Furukauntā」 is a reflective power possessed by the Dragon's Sin of Wrath, Meliodas, the Pacifier Fiend, Chandler and Mael under his Estarossa of Love persona.

Full Counter enables its wielder to reflect attacks aimed at them back at their enemy, but with more than double the power; therefore, the stronger the opponent's powers are, the stronger the user's power becomes. However, there are also many drawbacks to Full Counter: the user cannot initiate any attacks themselves[1], and they would not be able to reflect attacks if the opponent does not allow them to read the nature and timing of their attacks.[2]

There are two variations of Full Counter. Meliodas can only reflect "magic" attacks; his version of the ability is useless against indirect attacks or an ordinary punch.[3] He can supplement this ability through clones who can use it separately from the original. On the other hand, Estarossa can only reflect "physical" attacks.

Like Meliodas, Chandler can only reflect magic attacks, as seen when he tried to reflect Gowther and King's combination attack. 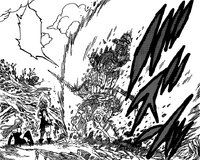 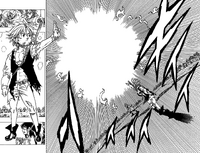 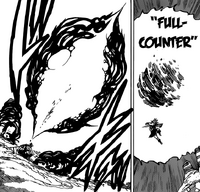