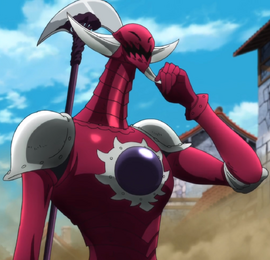 Galand「ガラン」 is an elite warrior of the Demon Clan, serving directly under the Demon King as the Truth of the Ten Commandments.

Galand anime full appearance
Galand is a very tall and slender humanoid demon. At first sight, he can be mistaken for someone wearing a full set of green armor (red and silver in the anime), when this is his actual body.[2] His knees and elbows are covered with a fierce and sinister mask-like designed pads. Unlike other high-ranked demons, Galand never displays a demon mark on his body.

When he uses his innate ability, Critical Over, his body transforms. He gets bulkier and his body is covered in spikes.

Galand is very sadistic and battle crazed, as he was very eager to go to battle against new enemies despite all of his magical power being drained. He was delighted that powerful people still existed after 3,000 years of being sealed. He has also shown a fondness for alcohol.

Galand also holds hatred for mages, stating they always ruined his fun, which he said to Merlin when she attempted to use magic against him.

As a member of the Ten Commandments, Galand fought in the ancient Holy War against the Goddess Clan and the other races (humans, fairies, and giants).

When the Archangel Ludociel took hostage to a horde of demons, Galand next to Derieri, Monspeet, Melascula, and Fraudrin directed an army of demons to the Fairy King's Forest to rescue them. There, they are confronted by the goddess Elizabeth who tries to give a peaceful exit to the situation, only so that the extermination of all the hostages and all the demon army ended up unleashing a battle between the Commandments and two of the Four Archangels. During the battle, Galand supports Derieri against Tarmiel, managing to cut the head of the Archangel without effect, being overcome by its power shortly after. After releasing his Critical Over, Galand manages to release a powerful attack on Sariel, only to be overpowered by Ludociel. When Derieri and Monspeet use their Indura Transformation, Galand flees the battle along with Fraudrin.

Along with the rest of the Demon Clan, Galand was sealed away by the Goddess Clan after losing the ancient war against the other four races.

As a member of the Ten Commandments, Galand is an extremely powerful demon despite being past his prime.[3] Like all members of the Demon Clan, he possesses their unique power of darkness which he can use for a variety of purposes, such as forming wings for flight.[4] His aura, combined with the aura of the other Ten Commandments is so terrifying that it made the normally calm Hendrickson sweat in fear by their presence along with unnerving Meliodas when he sensed it from several kilometers away. His power level has been measured at 26,000 in his depleted state, a magnitude far greater than most of the Seven Deadly Sins. While using Critical Over, Galand's power level rises to 40,000.[5]

Galand possesses immense physical strength, as shown when using his raw jumping power, he was able to reach the Kingdom of Camelot in 72 high jumps despite the distance being several kilometers[6] and easily reflected Diane's 998kg Gideon with a simple upward kick when she attempted to attack him.[7] While using Critical Over, Galand's physical strength gains a massive increase. With one swing, he destroyed a vast portion of the landscape while sending shockwaves strong enough to cleave nearby mountains.[8] He is extremely fast, traveling several miles in an instant when Merlin attempted to teleport him away and appearing behind her before she could react.[9] He also possesses immense levels of endurance and durability, having remained unfazed from a direct hit by Diane wielding Gideon, able to get back up after taking a brutal beating from Meliodas only to demand his location for a rematch even when badly wounded,[10] and emerges completely unscathed after being hit by Tarmiel's Ark.[11]

It is also worth noting that, despite his behavior being that of a violent brute, for the most part, Galand possesses excellent combat instincts, as shown when he reacted quickly when Merlin tried to teleport him away, and didn't hold back and used all his power when he sensed Escanor's strength, though it proved to be a futile effort in the end.

The Demon King bestowed Galand with the Commandment of Truth「 Shinjitsu」. This Commandment determines that any who tell a lie in Galand's presence will be turned to stone.[13] Only those who are aware they are lying will be affected.[14]

Though they have their disagreements, the time we've seen them alone shows that they are actually good friends who enjoy each other's company and drinking together. When Tarmiel and Sariel used Omega Ark, he grabbed Melascula out of harm's way, showing that he cares for her well-being.

Retrieved from "https://nanatsu-no-taizai.fandom.com/wiki/Galand?oldid=145718"
Community content is available under CC-BY-SA unless otherwise noted.