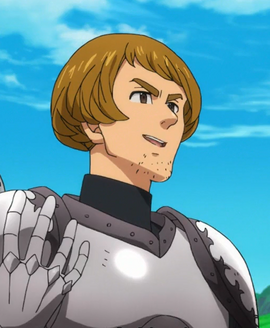 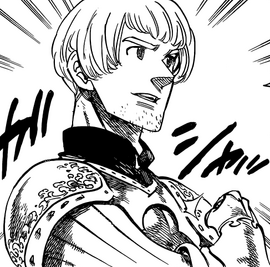 Gannon「ギャノン」 is a corrupt Holy Knight of the Kingdom of Liones responsible for plotting the death of the giantess chieftain, Matrona, sixteen years ago.[1]

Gannon is a handsome and comely young man with short combed hair. He wears a regal full body armor.

Gannon is an ambitious and manipulative person that he hid under his polite and courteous facade as he believed that killing Giants will give him more merits than taking out savage tribes and may lose composure when things didn't go according to plan but this led to his much deserved death for underestimating a Giant.

Hiring the famous Earth's Great Fang Matrona and Diane, Gannon and his force of 330 knights with giant ballistae engines met them in the open field where he greeted them courteously and brushed off the future Serpent's Sin of Envy about Meliodas, stating that he's just a scoundrel in knight's clothing. Gannon then led Matrona to attack two places where the supposed savage tribes are hiding before the Giant was trapped that revealed the true colors of the Holy Knights and his troops. Explaining that killing Giants might grant him a rise to the higher ranks, Gannon was about declare the massacre of the Giants to begin but Matrona fought back who was suspicious of the ballistae engines he brought along.

Gannon ordered his men to fire the poisoned bolt at the two Giants who blocked them with their earth barriers although one of them headed straight to Diane but Matrona took the hit and was poisoned but still managed to kill more of his subordinates. In a desperate bid, Gannon and his remaining troops tried to attack all at once but were impaled brutally in a series of sharp pillars by a dying Matrona, leaving a few survivors involved in his scheme who then framed a tearful Diane to be executed for her crimes of envy that led her to the path of becoming one of the Seven Deadly Sins, the Serpent's Sin of Envy.

As a Holy Knight of Liones, it is presumed that Gannon is very powerful in his own right. He is also durable for a short time before he was killed.

Gannon wields a sword he carries around and a poisoned bolt.

Retrieved from "https://nanatsu-no-taizai.fandom.com/wiki/Gannon?oldid=130724"
Community content is available under CC-BY-SA unless otherwise noted.