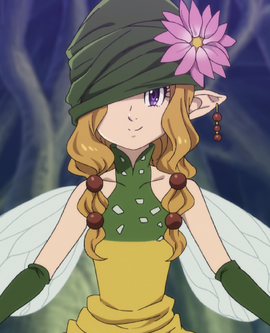 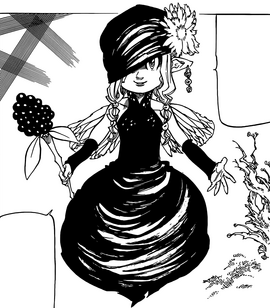 Adviser to the Fairy King

Gerheade「ゲラード」 is a fairy and serves as an adviser to the second Fairy King Dahlia and is the younger sister of Gloxinia, the first Fairy King.

Gerheade wears a long yellow dress that covers the stumps of her legs lost at the knees and a green hat adorned with a flower that covers her right eye socket which was slashed by one of the human members of Stigma. She also wears earrings that match her pointy ears and wings, and a fruit wand.

3,000 years ago, Gerheade's wings were longer, she had both eyes, she had both legs along with wearing a shorter dress and wielding a different fruit wand.

Gerheade is a mysterious, strange, and aloof fairy, but takes her job as advisor and the Fairy tradition very seriously. Like most fairies, she has a distaste and mistrust towards humans, which leads to her original animosity towards Ban. This hate she has may stem from the betrayal Rou and his comrades dealt with her during the Holy War. As harsh as she seems to be, she greatly cares for her fellow Fairies and wants to protect them.

During the Holy War, Gerheade is shown to be almost completely different from what she is right now with King himself being befuddled by the drastic contrast in her character. At that time she had a more kind, cheerful and innocent personality as she felt great empathy for others regardless of race, including demons, as she felt saddened by Ludociel's plan to use the demon citizens as hostages and bait though reluctantly accepted it as she was desperate for the war to end then. Her empathy allowed her to befriend humans then like Rou and even trusted them more so than now, as even after she was shocked and wounded from the betrayal of him and his comrades, she still sympathized with his loss that drove him to kill Stigma in revenge to point of trying to plead for his life to her older brother.

3000 years ago, Gerheade lived in the Fairy King's Forest along with her brother Gloxinia, the first Fairy King. During the Holy War, Gerheade stayed on the side of Stigma. She wanted the war to end at any cost, so she did nothing despite knowing about Ludociel's horrible plans of using demons held hostage as a living bait to destroy the rest of them. While her brother faced the Ten Commandments, Gerheade stayed in the forest under the care of a human named Rou. However, Rou and the rest of the humans attacked Stigma and began to kill everyone in the forest. Gerheade tried to reason with Rou, but then she was attacked by a human who left her without her right eye and cut off her wings and legs. After Rou killed him, he and Gerheade talked about Rou's past that led him to take revenge on Stigma, just as Gerheade took everything as punishment for doing nothing to Ludociel's actions. When Gloxinia appears to be witnessing the horrible scenario, Gerheade tried to explain what happened but could not prevent Gloxinia from murdering Rou. Somehow, Gerheade survived and continued to live for 3000 years.

Long ago, Gerheade was once an adviser to the old Fairy King, Dahlia, until he died and was soon replaced by King to whom she became an adviser for. However, this soon ended when King went missing after a rescue mission went wrong and eventually left the forest and Elaine to protect the Fountain of Youth. Gerheade later returned to the forest when Ban regrew the forest, but still disliked him for being human.

After Ban returns to the Fairy King's Forest to give some of his blood to keep the tree healthy, Gerheade appears and tells him that Fairy Kings are chosen by the Sacred Tree, that she dislikes Ban, and that she still believes King to be the true heir to the Fairy Clan.[1] However, Ban reveals that he does not want the job and that King can have it; however, she soon reveals her true plan and attacks Ban, hoping to use him for more blood for the tree. While Ban has the upper hand, he is soon distracted when she threatens Elaine's body.[2] Ban leaps in front of the vine, protecting Elaine but also letting himself get trapped.[3] She leaves the chamber and finds King fighting an Albion. When the Fairies start to fight back, she takes King far away to protect him. He, instead, unleashes True Chastiefol to slay the creature and is injured in the process.[4]

Afterward, she held King as Ban healed him, and then tried to apologize to and thank Ban, who interrupted her and told never to endanger Elaine. She promised to protect Elaine.[5]

In the forest, Gerheade feels when Melascula opens the gate of the dead world and summons the souls of the deceased. There, Gerheade is present along with the other fairies as Elaine is returned to life. However, she and the other fairies are attacked by an Elaine dominated by her hatred. Gerheade tries to reason with her, but Elaine attacks her with her Soyokaze, not Gekirin for what she did to Ban.

When the Ten Commandments takes out their conquest over Britannia, Gerheade maintains safe along with the other fairies grants to the Fairy King's Forest magical burden.

After reunited with King, Gerheade adverts him about a strange presence that she was feeling around the forest, although she can identify or clarify it. While King decides to let everyone to have a good moment to dance and mashes merry, Gerheade shows happy. There, when everyone enters a strange trance, Gloxinia introduces himself and has a close moment with Gerheade when dancing. Upon returning from the trance and notice the emergence of King and Diane, Gerheade cries for happiness and familiarity that fails to understand.

After putting King and Diane in trial, Gloxinia finally meets with Gerheade after 3,000 years. Gloxinia asks his sister for forgiveness for his past actions, Gerheade forgives him affirming that everything is in the past. When Oslo sees Gloxinia embracing Gerheade, he immediately tries to attack him, but Gerheade stops him by telling him that he is not the enemy. When Gerheade tells her brother about Oslo, who protect her after his disappearance, Gloxinia realizes that he is Rou's reincarnation.

When the Fairy King's Forest is attacked by the Demon Clan, Gerheade alongside Matrona directs the other giants and fairies to defend the forest.

Gerheade can hear the voice of Rou's soul after Oslo's death, saying that in the end, he protects what she most values.

After this, Gerheade goes along with the other fairies and giants to meet with the Search-and-Destroy Force and join on their way to Camelot. Gerheade presence with the rest of the forces the power of darkness that looms over the battle that took place in Camelot.

On the way, the group is ambushed by a new ordeal of Demons. During the fight, Gerheade saves Elaine from an Orange Demon, restraining it with several pods and tells Elaine to return and rest her body. However, Elaine says it does not matter since her life is merely temporary.  As Elaine falls, Gerheade watches Ban coming and catching her after killing the demons. Gerheade is saddened with the rest when Elaine dies in Ban's arms. However, she is surprised when she feels Ban's life force being transferred to Elaine as he sacrifices his immortality to resuscitate her.

When the demon army retreats from Britannia after the defeat of the Demon King, Gerheade and the other survivors see themselves in front of the end of the Holy War.

That night, Gerheade along Matrona and Puora comes to Liones after being invited to the celebration. In the streets, the three meet with Jericho and Guila.

Gerheade then attends the celebration in the new Boar Hat. There, she is seen admiring King's new appearance and full growing wings.

Gerheade is seen along other fairies in the Fairy King's Forest watching as the Demon King stands with a new, gigantic and monstrous vessel created from the same land of Britannia.

18 months later, Gerheade is angry with the other fairies when they do not stop spying on Ban and Elaine who were waiting for the birth of their baby. Gerheade thinks that it is the first time that a fairy and a human have conceived and as soon as she wishes that Rou and Gloxinia can see the peace that exists in the world.

Gerheade demonstrates the ability to control nature through her wand, being able to sprout large amounts of roots that serve to attack her enemies. Gerheade seems to have obtained immortality of some sort, having remained alive for over 3,000 years, which is more than any fairy is supposed to live.

Gloxinia is Gerheade's older brother, not much is known about their relationship, though during an illusion that was cast on her, King, Diane, Matrona, and the other fairies while dancing, she cried when she heard his voice.

Rou saved Gerheade when her wings and legs were cut by a human when a huge massacre happened at the Stigma Base 3,000 years ago. Rou did leave Gerheade unhurt when he saw her, instead saying if she wanted to live she should leave. When Gloxinia saw Gerheade hurt he blamed Rou killing him without hesitation.

Retrieved from "https://nanatsu-no-taizai.fandom.com/wiki/Gerheade?oldid=155305"
Community content is available under CC-BY-SA unless otherwise noted.