The Giant Clan「巨人族, Kyojin-zoku」 is one of the five major races in the world of Nanatsu no Taizai.

According to the Lady of the Lake, the Giant Clan was created by Chaos after it created the Supreme Deity, the Demon King and the Sacred Tree.[1] However, Chaos grew disappointed with the Giants for being a wild race, slaves to their own power and knowing nothing other than inflicting pain on each other.

In Britannia, their societies are lead by great warrior chiefs. According to the myths, Drole was a highly respected ancestor of the Giant Clan, having developed a sacred dance with deep connections to nature and earth.

3,000 years ago, the Giant Clan allied with the Goddess Clan, Fairy Clan and humans and fought against the Demon Clan and won with the Coffin of Eternal Darkness sealing the defeated demons.

The Giants live for battle and were often hired by humans of different kingdoms to provide them the battles to fight as mercenaries. As a result, however, the Giant Clan's status is currently in danger due to deaths in battle they could find.

Giants also live in world of Midgard of Yggdrasil where they reside in Jotunnheim but Ymir's wall blocked the giants out for thousands of years until it collapsed and break apart causing the giants to now invade the human kingdoms there.

They are identical to humans with the exception that they are much larger in size. Their way of dress is similar to that of the Western Savage Tribe.

In rare cases, Giants can present more divergent features, like Drole who had a blue skin, four arms and a missing left eye.

Giants from world of Midgard of Yggdrasil wear winter clothing due to the constant never ending winter. 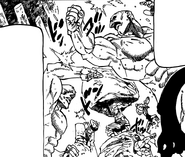