The War Hammer Gideon「ギデオン, Sentsui Gideon」 is Diane's Sacred Treasure. After her having lost it[2], it was presented one of the two rewards for winning the Vaizel Fight Festival,[3] but has since been returned to Diane.

Gideon is a gigantic war hammer designed for a giant. It is as tall as Diane, its head being double-sided with one side being a typical hammer and the other being a warpick. Gideon also includes a pommel on its other end.

After the Seven Deadly Sins' disintegration 10 years ago, Diane lost Gideon for a yet unknown reason[4]; it was later found in a valley, and then subsequently became one of the rewards for winning the Vaizel Fight Festival.[5] During the Holy Knights' attack on the Deadly Sins, a shrunken Diane was attacked by Marmas. After returning to her normal size, the giant, angered by the proceedings, especially Helbram's wounding Meliodas, proceeded to retaliate in full force, showing the immense power of Diane brought out by Gideon which forced Helbram, and his subordinates, to retreat. It caused the total destruction of Vaizel in the aftermath.

Gideon, like the other Sacred Treasures, fully draws out Diane's powers. With it, Diane's ability to manipulate the earth is multiplied manifold. In her first use of it, Diane proceed to obliterate the surrounding ground, and send a mountain-sized boulder high in the air.[6] 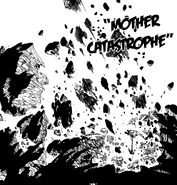 Diane crushes the area with the floating mountain 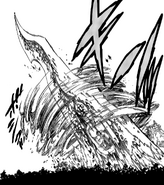