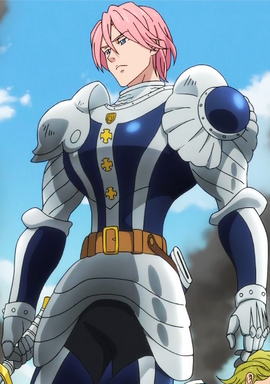 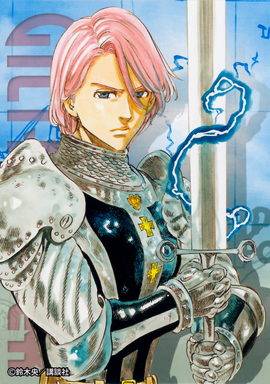 Gilthunder「ギルサンダー」 is a Diamond-ranked Holy Knight and the son of the former Great Holy Knight, Zaratras.

He is seen wearing dark-colored full body knight armor without a helmet and wields a single hand sword. The upper body armor is carved with several crosses and the symbol of the Holy Knights. He also has a leather waist belt fastened on top of his armor.

Gilthunder was a seemingly cold and cruel individual around the start of the story, devastating a town by stopping its source of income simply because he was angry with them.[2] When he learned that a child pulled out his sword[3], he threw a spear at the town just to check whether it or not it was an accident, even though the town could have been destroyed.[4] However, despite that, he is honorable as he gave Meliodas a final request when he thought that he was dying. He has a desire to kill the Seven Deadly Sins for supposedly killing his father. To prove that he has, both, surpassed & to avenge his father, he attempts to hunt and kill the Seven Deadly Sins.

In his childhood, Gilthunder was a sweet and friendly child, especially towards the Seven Deadly Sins. Specifically Meliodas, who trained him in the art of swordsmanship before turning dark after the Seven Deadly Sins were accused of killing his father. However, later in the story, it was revealed that Gilthunder was acting cruel and ruthless, as Margaret, the woman he loves, was being held hostage and being used against him to join the Holy Knights. After being freed by Meliodas, Gilthunder returned to his old and kinder self.

Back in the old days, Gilthunder was friends with Howzer, Veronica Liones, and Elizabeth Liones, who used to all play together. At some point in time, Meliodas taught Gilthunder the fundamentals of swordsmanship and "The Way of the Knight". Gilthunder used to look up to the Seven Deadly Sins and wanted to be just like them. During one point in his training, Gilthunder became Margaret Liones' personal knight and developed a crush on her during their childhood. During one of his training with Meliodas, Gilthunder grew upset as he believed he would never become as strong as the Deadly Sins or his father. But Meliodas told him to ditch his negative attitude. And Margaret came and told him 'The Way of the Knight' creed. Margaret told Gilthunder that he should be himself, and not like the Deadly Sins or his father, and believes that Gilthunder will be the kindest and strongest Holy Knight some day. This puts Gilthunder in a better mood. However, the next day, Gilthunder comes running towards Meliodas and tells him to run away with the others. Meliodas doesn't understand this and asks Gilthunder to explain. Gilthunder answers that something terrible is coming and if he told anybody, bad things were going happen, and Gilthunder had no idea what to do.

Meliodas told Gilthunder to calm down, hitting him on his head, and asks him what he wants to do. To which Gilthunder answers that he needed to protect Margaret, he just didn't know how. To calm his nerves, Meliodas teaches Gilthunder a charm to say whenever he feels trapped and in need of help but has no way to ask. If Gilthunder said the charm, Meliodas would always come to his aid in his time of trouble. The charm would be to say that he was stronger than any of the Seven Deadly Sins. Ten years later, Gilthunder was forced to join with the Holy Knights for Margaret's safety and somehow knew of his father's true murderer.

Gilthunder, like all Holy Knights, has magic that transcends human knowledge imbued within his body, and is among the strongest in Britannia, being able to match entire armies. He is shown to be incredibly strong and agile, easily matching Meliodas in skill[5] and remaining unharmed after being flung from a great height and crashing into a building, destroying it in the process.[6]He is noted to be a Great Holy Knight class according to King. After the training in the sacred land of the druids, his power level increases from 1,970 to 2,330.

Gilthunder wields a long sword, through which he channels his lightning magic. The tip of the blade is curved and wider with the ends pointed.[7]

Gilthunder is Zaratras's son. It is unknown what kind of relationship they had but since Gilthunder wants revenge for his death, it can be assumed that they had a good father-son relationship.[8]

Gilthunder is Dreyfus' nephew. Gilthunder displays loyalty and devotion to the Great Holy Knight though his uncle is responsible for his father's murder 10 years ago. Most likely like Hendrickson he despises his uncle due to his participation in causing his father's death but seems to regard him as the lesser evil as he gives him information on Hendrickson's actions.

Howzer and Gilthunder have greatly different personalities[9], but appear to fight very well as a team.[10] However, when Gilthunder was freed by Meliodas, Gilthunder appeared a lot lighter and softer to Howzer, seeing him as his dear friend and didn't blame him for not noticing Gilthunder trouble.

Gilthunder for the most part followed Hendrickson's orders, but appeared suspicious of his actions as he gave Dreyfus information on his movements. After the creature threatening Margaret was slain by Meliodas, Gilthunder quickly stopped him from killing Meliodas, via cutting off his right arm. When Hendrickson questioned on him betraying him, Gilthunder quickly responded that he was never on his side and then proceeded to fight him, proclaiming his desire of revenge for his father.

Vivian has had an obsessive love over Gilthunder for years while Gilthunder doesn't share the same feelings. Vivian's behavior has shown to the point she holds Margaret hostage for years to get him to follow her every word, disguises herself as a man named "Gilfrost" to get closer to him and even kidnap him in the middle of a battle against the Ten Commandments and to hold him prisoner in one of the old temples made by The Goddess Clan. She is currently under the "Cursed Engagement" curse that activates under Gilthunder's command or when she inflicts her magic on him.

In the past, Gilthunder used to treat Elizabeth as a little sister. However, now, even though the kingdom's priority is to ensure her safety, he says that he doesn't care about her and that she is a "grain of sand in the path to the Holy Knight's rule".[11] However, it was revealed that he never hated Elizabeth as it was an act, and likely still cares for her.

Gilthunder has for more than ten years been in love with Margaret and has made it his sworn duty to protect her. Gilthunder was forced to join the Holy Knights for her safety, during which he took a cold and ruthless persona. After Meliodas killed the invisible creature threatening her, he quickly dropped the act and embraced her, which she returned, after defeating Hendrickson.

Gilthunder once admired Meliodas and the rest of the Seven Deadly Sins, even wanting to be one of them. After his father was apparently killed by them, he wanted to kill them for revenge and to prove that he has surpassed his father.[12] However, it was revealed that it was an act and Gilthunder still admired Meliodas, seeing him as his hero. Despite finding out that Meliodas is related to the Demon Clan, Gilthunder still sees Meliodas as a great knight, and there is no finer knight than Meliodas. He would seemingly give his life in order to avenge him.

Retrieved from "https://nanatsu-no-taizai.fandom.com/wiki/Gilthunder?oldid=137097"
Community content is available under CC-BY-SA unless otherwise noted.