Start a Wiki
watch 02:29
Who is Gloxinia?
Do you like this video? 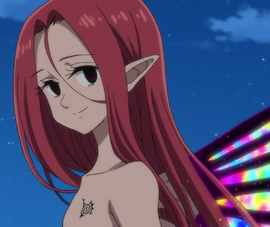 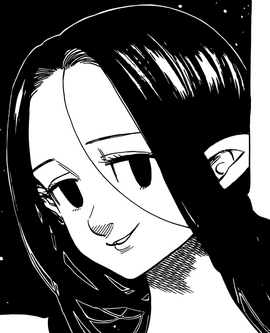 Gloxinia「グロキシニア」 is the first king of the Fairy King's Forest, but later defected and became recruited as the Repose of the Ten Commandments. Later ultimately left and returned to affiliate with the Fairy Clan.

Gloxinia's true appearance
Gloxinia's anime design (Basquias)
Gloxinia's full anime design
Gloxinia is usually seen with Basquias wrapped around him in the form of green octopus-like tentacles. While having Basquias around him only his upper chest is exposed and his hair covering his pointed ears. This gives him the appearance of a young female woman. However, When not surrounded by his shroud and revealing his true appearance, it can be seen that he possesses large, lustrous and rainbow-colored butterfly-like wings. Gloxinia has the Commandment tattoo on his chest, pointed ears draped by his long bright red hair, and a gray corsage on his left wrist. He wears baggy white pants which have dark blue butterfly scale-like patterns at the cuffs. Around his waist he wears a green sash and wears a set of black shoes.

Before he aligned with the Demon Clan, his eyes were not black and the Commandment mark on his pectoral didn't exist.

In the past, Gloxinia used to be much happier and had an outgoing and caring personality often enjoying playing childish games as well as protecting the Fairy King's Forest, until an incident 3,000 years ago.

As a member of the Ten Commandments, Gloxinia has an upbeat and go-free personality but very sadistic demeanor, seemingly reveling in taunting others and killing. He holds a very deep loathing and resentment towards humans due to the betrayal Rou and his comrades committed towards Stigma when he initially believed his sister, Gerheade, was killed by him, but despite this, Drole notes he seems to enjoy imitating them.

After the Great Fight Festival he reverts to his original comedic, caring, headstrong and outgoing personality confidently stating to Zeldris he is ready to fight him at full force. Gloxinia even expressed how much he resents turning to the Demon Clan and glad he can atone for his sins in his final moments.

In the ancient Holy War 3,000 years ago, Gloxinia used to be friends and fought alongside both Drole and Meliodas as members of Stigma. But he was betrayed by Stigma and the human Rou and had something even more important than his own life stolen from him, his sister, Gerheade.[3] This drove him to turn to the Demon Clan because he felt all trusted comrades has stabbed him in the back, eventually becoming a demon himself and being appointed as one of the Ten Commandments. He was eventually sealed away in the Coffin of Eternal Darkness with the rest of the Demon Clan, by the Goddess Clan during the first Holy war.

As a member of the Ten Commandments and a former Fairy King, Gloxinia is extremely powerful. After receiving a Commandment from the Demon King, Gloxinia obtained powers related to the Demon Clan, like their unique power of darkness, similar to Meliodas at Vaizel. He is capable of utilizing this dark power to form helicopter-shaped wings for flight. He keeps the tips of Basquias covered in this dark power at all times. His aura is so powerful that he makes the normally calm Hendrickson sweat in fear of his presence, combined with the other Ten Commandments and unnerved Meliodas when he sensed it several kilometers away. King has stated that the amount of power coming from him is incredibly huge.[4] As a Fairy, he can also control nature and has been shown to make Flower Dolls「花人形 Hana Ningyō」 from foliage.[5] These vegetation golems possesses tremendous power, vitality, and regeneration. Gloxinia with Drole's help is also powerful enough to go toe-toe with Chandler the highest-ranked Demon when he is using his full power and hold their own against him for a short amount of time.

Though physically weaker than the other members of the Ten Commandments due to his fairy nature, Gloxinia possesses immense endurance and durability as he not only survived but remained conscious from a massive attack by Escanor which destroyed the large boulder of Vaizel and threw him through the labyrinth Drole created though it did take him some time to recover and heal himself. Later he was able to endure attacks delivered by Meliodas with his demon mark activated in order to heal himself and Drole. Gloxinia also has great flight speed due to having the largest wings of fairies, seen when he managed to dodge some of Meliodas' attacks with his demon mark activated before being eventually outpaced. Furthermore, King took note of the greater speed he flew at while inside Gloxinia's body during his trial.

The Demon King bestowed Gloxinia with the Commandment of Repose「 Ansoku」.[9] The effects of its curse are currently unknown.

He wields the Spirit Spear Basquias「霊槍バスキアス Reisō Basukiasu」, which is most commonly seen in the form of green, octopus-like tentacles wrapping around his body. It has at least ten forms.[10]

Gerheade is Gloxinia's younger sister. The two were extremely close, and he protected her from almost anyone and anything. During the Great Fight Festival he creates a golem in the likeness of Gerheade during his battle against Diane and King, and is shown to be upset by its destruction. When they finally were reunited their relationship remained the same.

Long ago, he and Meliodas were close friends and comrades-in-arms during the war against the Demon Clan. Even now, he remains very interested in Meliodas, wishing to fight him in the Great Fight Festival. After leaving the Demon Clan, he respects Meliodas as much as he uses to and are back on good terms even fighting on his side against the Demon Clan. In his final moments, he wished for Meliodas to be rewarded for all his suffering.

During the ancient war 3,000 years ago, Gloxinia and Elizabeth were friends and comrades. Not much is known about their relationship, though Gloxinia had said that she was a dear friend to both him and Drole. When he and Drole came to save the Seven Deadly Sins from Chandler, he finally realized that Elizabeth Liones was the reincarnation of the one of his dearest friends from 3,000 years ago. In his final moments he wished for her to be rewarded for all her suffering.

As the current Fairy King, and as a member of the Seven Deadly Sins, Gloxinia viewed King as not only as an enemy, but also as an unworthy successor to the title of Fairy King. This was seen during the Great Fighting Festival when he saw how King struggled to use the full power of his Spirit Spear Chastiefol during his battle, but he was impressed by King's determination to protect Diane, despite his criticisms on King's control of his power. Later when he and Drole approached King and Diane in battle, Gloxinia was impressed by King's readiness to battle him, though shrugged off most of King's attacks towards him, stating that he could be stronger than he currently is if he had his wings. After King passed his trial and his wings grew, Gloxinia opinion towards King has significantly changed. He could easily see King's growth from the trial and also even saw some similarities between the two of them, mostly their love for their sisters as well as their love for the Fairy King's Forest. As a result, Gloxinia now seems to hold King in high regards, as he came to his rescue during the fight against Chandler, and his final words to King were how even though his wings had just grown, his power has now become comparable to his own, that eventually as they grow he would definitely become the most powerful Fairy King of all times, suggesting that he finally viewed King as a worthy successor.

Drole and he pair up when the Ten Commandments split up, and they seem to get along fine. Though Gloxinia likes to tease him by calling him "Balor", Drole nonetheless accommodates his plans for the Great Fight Festival and helps with all the preparations. Gloxinia and Drole were close friends and comrades-in-arms during the war against the Demon Clan. Gloxinia seems to care for his comrade as during their fights with Meliodas he healed Drole without hesitation several times using his Inochi no Shizuku technique even though he stated later that it was limited in uses.

During his time with the Commandments, Gloxinia respected Zeldris very much and viewed him as a suitable leader. However, after leaving the Commandments Gloxinia is no longer on good terms on him and views him as a common enemy.

Gloxinia initially was fond of Rou and liked him, but when the humans betrayed the other clans, and he found Gerheade "dead" in his arms, he brutally killed him. Gloxinia hated Rou because he thought he killed his sister but after realizing the truth he began to like him more than he realized he kept his promise to Gerheade and reincarnate in Oslo, protecting her like he said.

Retrieved from "https://nanatsu-no-taizai.fandom.com/wiki/Gloxinia?oldid=147187"
Community content is available under CC-BY-SA unless otherwise noted.