View source
watch 02:00
What is the Goddess Clan?
Do you like this video?
Play Sound

The Goddess Clan「女神族, Megami-zoku」 is one of the five major races in the world of Nanatsu no Taizai.

According to the Lady of the Lake, the Goddess Clan and their realm were created by the Supreme Deity, after she was created by Chaos, alongside the Demon King and the Sacred Tree.[1]

3,000 years ago, the Goddess Clan constantly clashed with the Demon Clan. Similar to the latter's Ten Commandments, this clan has their own elite unit, the Four Archangels, who even the Ten Commandments must be wary of, according to Monspeet. Despite often battling, most goddesses acted gentle towards humans and considered killing demons as a way to save them. However, the two legendary clans were largely evenly matched and thus a tentative balance was created.[2] At some point in time, they broke a treaty with the Demon Clan, and even slaughtered many women and children they were holding as prisoners of war.[3]

However, when Meliodas had betrayed his own people for his alliance and relationship with the Supreme Deity's daughter Elizabeth and severely crippled their strength by killing two members of the Ten Commandments, the rest of goddesses seized the opportunity to finally defeat the Demon Clan and instigated the Giant Clan, Fairy Clan and humans against them, starting the Holy War.

As a result, the Demon Clan was ultimately defeated by the Goddess Clan and their allied clans and sealed away in the Coffin of Eternal Darkness for 3,000 years, realizing it was the only way to win after losing their strongest fighter Mael. Despite their victory, they lost much of their power and the ability to maintain their physical forms in order to seal the Demon Clan for 3,000 years. The souls of the Goddess Clan came to inhabit within objects, only being able to manifest themselves by taking the body of another being as a vessel.

According to Jelamet, a majority of the goddesses apparently inhabit places called "Sky Palaces", where they lay dormant, as she made use of the gate in the altar to bring the remainder of the Goddess Clan to invade and control Britannia.[4]

An unknown Goddess had taken possession of the Horn of Cernunnos to manipulate Humans and force them to attack Meliodas, but what happened to her after the destruction of the Horn is unknown. Jenna and Zaneri were two Divine Soldiers who simply chose to desert the Divine Militia, because they no longer agreed with their peers on the merits of the Holy War, and took possession of two human twins to hide from other Goddesses. Ironically, they took the opportunity to become the Leaders of the first Druids, who worship the Goddess Clan.

In the present day with Hendrickson unleashing the Ten Commandments by incompletely breaking the seal, the Four Archangels "revived" to join the reincarnation of Elizabeth, the Seven Deadly Sins and the other races against the Demon Clan, now facing a new Holy War. However, two of them lost their physical bodies again while it was revealed that the Archangel Mael is still alive and turned into one of the Ten Commandments. After the return of Mael, the leader of the Archangels also loses his physical form at the end of the new Holy War, making Mael possibly the last of the Four Archangels.

Following the defeat of Cath Palug, Orlondi is seen breaking out of the underground bunker in the ruins of Camelot and is seen helping Nanashi bring out the people where most were saved by Nanashi, as it is revealed he is actually a Goddess but for some reason there are four scars on his back where his wings used to be and claims it to be an old story as he was now nothing more than a wandering swordsman with no master.

Members of the Goddess Clan appear entirely human other than one pair, or more, of angel-like wings. Some Goddesses has been shown to have more divergent features, like Tarmiel, who possess multiple heads, or be as tall as a Giant.

Higher ranking Goddesses are generally distinguished by their multiple pairs of wings. The number of wings and its size are generally indicators of a Goddess' power.

Whenever some Goddesses inhabits a physical vessel or whenever they use their magical powers, their eyes become orange and manifest a triskelion symbol.

Wings of the Goddess Clan manifested by Elizabeth

The Goddess Clan is an extremely powerful race able to stand on equal ground with the Demon Clan, although it required the cooperation of the fairies, giants and humans to seal them away after losing their strongest fighter. Despite their power, they needed physical forms to actually affect the world by their actions. According to Ludociel, they aren't actual Gods like the Demon King and the Supreme Deity or the Sacred Tree, despite their massive power. Members of the Goddess Clan share several common abilities:

Used by Jelamet to open the gate leading to the Celestial Realm.[12]

Used to allow deceased souls to reincarnate in a new life with their memories of their past life intact. [13]

Used by Denzel Liones to summon the Goddess Nerobasta and manifest her within his body.[14]

Ranks in the Divine Militia

The Four Archangels「四大天使, Yon Daitenshi」 are the strongest and highest-ranking members of their race, outclassed only by the Supreme Deity herself or her children.

Divine Lance Corporal「神兵長, Shinpei-chō」 are Goddesses who serve the Four Archangels within the Divine Militia and are of higher rank than Divine Soldiers.

Divine Soldier「神兵, Shinpei」 are Goddesses who serve the Four Archangels within the Divine Militia and are ranked below a Divine Lance Corporal.

Goddess Clan fighting alongside its allied clans against the Demon Clan 3,000 years ago

Apostle of the Goddess Clan

Horn of Cernunnos, the communication relic of the Goddess Clan 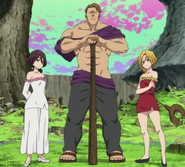