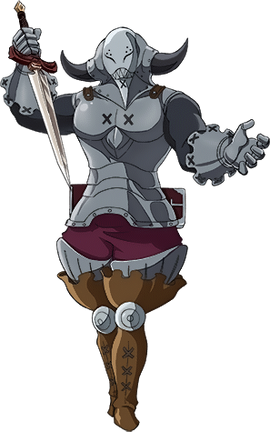 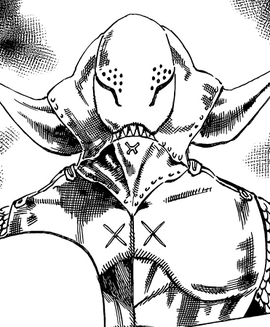 Golgius「ゴルギウス」 is a Holy Knight, who, belonging to the infamous Weird Fangs stationed at Baste Dungeon, aided in the capture of the Deadly Sin, Ban.

Full Appearance
Golgius without his armor
Golgius is young man with long light hair tied in a ponytail and a goatee. A mark crosses his right eye from the forehead to the cheekbone.

His helmet looks like a demon with slanted eyes, nine dots over each eye, a mouth with sharp teeth, and horns on the sides. His torso is covered with a metal breastplate while his arms are covered in chain mail. His upper legs are also covered by armor, whereas his lower legs appear to be clad in knee-length metal boots.

Golgius is first shown to be a polite person[1] but his true personality is that of a cruel and cowardly man. He is willing to use under handed tactics, including but not limited to, kidnapping Dana's daughter Sennett to force him to poison Meliodas[2], and throwing blades at his opponent while pretending to surrender.[3]

Five years before the beginning of the series, Golgius and the three other members of the Weird Fangs confronted Ban of the Seven Deadly Sins. The resulting battle ended in Ban's capture and imprisonment in Baste Dungeon, where Golgius remained as one of the dungeon's four guardians.[4]

The guards that are guarding Ban mentions that he, along with the rest of the Weird Fangs, are at the Baste Dungeon.[4]

Golgius is first seen inside the Baste Dungeon, along with the rest of the Weird Fangs, listening to Friesia informing them that he is going to launch the first offensive and kill both Meliodas and Diane.[5]

Later, when Dana tells Elizabeth and Hawk that he had poisoned Meliodas, Golgius thanks him for holding his end of the deal, explaining that they have to take significant measures to face one of the Seven Deadly Sins, since even they wouldn't come out unscathed if they fought them head-to-head. He then appears before Elizabeth and Hawk and introduces himself to them, telling them that he has come to take Elizabeth as well as Meliodas' sword, which he grabs.[6] However, Meliodas, who is revealed to still be alive, doesn't let go of it. Golgius then quickly escapes by jumping out of the window when he sees Meliodas' enraged face.[7]

While walking in the streets, he wonders as to what would have happened if he had escaped a second later and seems to be surprised when Meliodas, Elizabeth, and Hawk quickly find him; he quickly surrenders, telling them that he is a coward and doesn't like fighting. However, Meliodas notices the blades that he threw and blocks them, as just then, Dana also finds him and demands the return of his daughter, leading Golgius to disappear, and kill Dana by stabbing him in the back. He also tells him that his daughter will join him in the next world shortly. He then attacks Elizabeth, before Meliodas stops him.[8]

While Meliodas, Elizabeth, and Hawk run, he repeatedly attacks Elizabeth, only for Meliodas to move her out of the way every time. When the three run into an old building, Golgius tries to kill the Deadly Sin from behind but falls for a trap that the latter had placed earlier, and falls down to the bottom floor. There, Meliodas explains Golgius' abilities before attacking him with his sword at point-blank range[9], which sends him flying into the street. Upon being asked the reason he is after Meliodas' sword and Elizabeth, the Holy Knight takes advantage of a small distraction and escapes on a horse. As he then leaves the town, he comments about how frightening his mission was.[10] When he reaches the Baste Dungeon, he encounters Friesia and Ruin, who had finished getting ready to fight Meliodas and Diane.[11]

Later, after Friesia and Ruin are defeated and Meliodas and Diane enter the Baste Dungeon, Golgius compliments the Seven Deadly Sins for managing to do so and uses an Incantation Orb to trigger the Eternal Seal Spell and seal them inside.[12] Just as he starts to head back to the kingdom and report it to his superiors, he is shocked when the Baste Dungeon collapses due to a ruckus between Meliodas and Ban.[13]

When the Ten Commandments take over Britannia, Golgius becomes a target of those who seek to sacrifice souls from Holy Knights to the demons just for protection. Golgius manages to escape from the kingdom and hide in the fog. However, he realizes that the same thing will happen to him wherever he goes, claiming that he never expect things to end that way for him. There, when Hawk Mama appears in the fog, Golgius confuses her with a demon and faints.

Initially believing himself dead, Golgius awakens in the room of the Boar Hat. Upon descending, he discovers that the bar is being run by Elizabeth and Hawk. Golgius appears to be served by them while believing that they do not recognize him without his armor. After discovering that they actually know who he is, Golgius rushes in asking why they helped him in spite of being his enemy. Elizabeth says it was because Meliodas would have done the same thing. Although Golgius says that it is no longer possible for him to remain alive, Elizabeth tells him that while he is alive, he can fight to protect someone who he can share his feelings him. Golgius leaves stating that they will never be sane. However, as he walks away, he thinks that Elizabeth's light is too bright for someone who has been wrong all his life.

Golgius, like all other Holy Knights, has magic imbued within his body. Golgius is an extremely strong fighter as he was able to defeat Ban of the Seven Deadly Sins along with the other Weird Fangs.[4] He has the capability of turning invisible or transparent[14] and uses the technique to pretend that he is teleporting from one place to another.[15]

Golgius wields a large board sword, that is forked into three points.[16] He also wields crescent-shaped blades, that he uses to attack opponents while claiming to have surrendered, taking them by surprise.[17] Golgius also carried with him an Incantation Orb that, after being broken, cast the Eternal Seal Spell, a very powerful sealing magic that seal the target within a magical barrier. The barrier is strong enough to contain ten Tyrant Dragons, each of whom had the strength to level an entire town single-handedly, but was no match for the Seven Deadly Sins.

Golgius and Friesia are both members of the Weird Fangs. They seem to be on good terms with each other as shown they're playing chess together.

Golgius and Ruin are both members of the Weird Fangs.

Golgius and Jude are both members of the Weird Fangs.

Initially, Golgius seems to show respect for the medical doctor and be on good terms with him. However, it is soon revealed that the Holy Knight was in fact threatening Dana to poison Meliodas by holding his daughter as a hostage .[2] He also fatally stabs Dana from the back in order to censor the fact that the Holy Knight have ordered citizens to poison children.[20]

Despite her kind and forgiving nature, Golgius has a hard time understanding why Elizabeth forgives him for trying to stab her in Dalmary Town. Golgius also finds her light to be too bright for him, saying that they have completely different ways of seeing the world they live in.

Retrieved from "https://nanatsu-no-taizai.fandom.com/wiki/Golgius?oldid=145609"
Community content is available under CC-BY-SA unless otherwise noted.