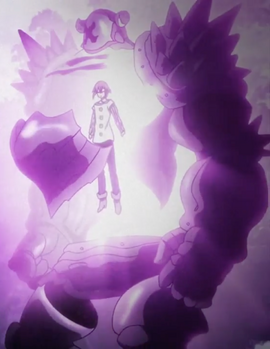 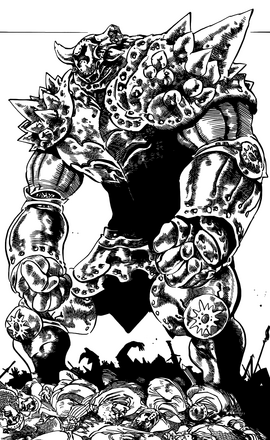 The Enchanted Armor was donned by Gowther, a member of the Seven Deadly Sins. It was revealed that Merlin was the one who created and gave the armor to Gowther several years ago.

Gowther's Enchanted Armor is full silver body armor with a helm featuring a pair of horns with one broken. It is most noticeable for its massive spiked metal shoulder plates. Its overall size is larger than an average human but is comparatively smaller than Giants.

Ten years ago, Gowther wore the armor during missions with his fellow Sins and never showed his true appearance not even removing his helm once, giving Ban the impression that he was a huge old man. After the group dispersed and went into hiding, Gowther wandered into the Ordan's forest where he encountered a horribly mutated Dale, who killed and devoured animals. To prevent him from going out of control, he sealed Dale inside the armor.

The armor was heavily damaged during the battle between Dawn Roar and the Armor Giant, and the helm was incinerated by Guila's explosion.

The armor is enchanted with the ability to suppress and prevent magical powers from becoming uncontrollable. Given the large size of the armor, it grants the boost of the user's current physical strength making the wearer more formidable and dangerous in terms of brute force.

Gowther removing his enchanted armor to seal a mutated Dale

The head of the Armor Giant with the helmet

Gowther in armor ten years ago

Gowther's armor on the cover of Volume 7

Retrieved from "https://nanatsu-no-taizai.fandom.com/wiki/Gowther%27s_Enchanted_Armor?oldid=149976"
Community content is available under CC-BY-SA unless otherwise noted.