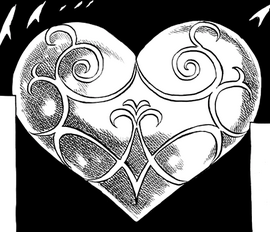 Gowther's Magic Heart is a heart created and powered by magic given to Gowther by his creator.

The heart is a charm created by the wizard Gowther and installed inside the chest of his doll Gowther. The wizard told him that it possess a "heart magic" that gives him the will and emotions of a living being.

When Nadja Liones died for her heart condition, Gowther tries to revive her by transplanting the magic heart on her chest, to no avail. Gowther discarded the magic heart in the dungeons of Liones castle, where Bartra Liones would find it.

Merlin reveals that the Heart was actually an ordinary object with no magic on it all along. She speculates that the wizard gave it to Gowther as a way to comfort him for being a doll and to symbolize his true heart.

King later turns the heart in a necklace for Gowther, which this one wear until it is destroyed by Mael.

Retrieved from "https://nanatsu-no-taizai.fandom.com/wiki/Gowther%27s_Magic_Heart?oldid=136340"
Community content is available under CC-BY-SA unless otherwise noted.