Start a Wiki
watch 01:34
Who is Gowther?
Do you like this video?

For the character that is a member of the Seven Deadly Sins, see Gowther 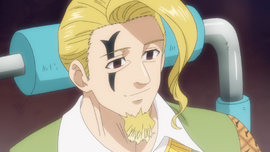 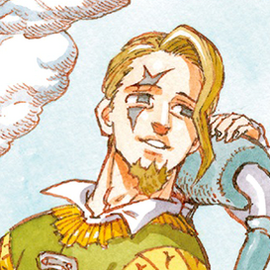 Member of the Ten Commandments (former)

Gowther「ゴウセル」 is an elite warrior of the Demon Clan, serving directly under the Demon King as the Selflessness of the Ten Commandments. Forcibly bestowed with the Commandment of Selflessness by the Demon King, he was subsequently trapped in the Demon Prison for five hundred years for refusing to fight. He used his Invasion on Melascula to connect the Demon prison to the Stigma Headquarters to escape. While imprisoned, his only contact with the outside world was through Gowther, a doll he created.[1]

Full Appearance
Past Appearance
Gowther is a male demon who looks like he is in his forties. He has dirty blonde hair, and a lightning shaped cowlick in front of his right eye. His demon mark is a black mark that goes above and below his right eye. He wears a green vest and yellow shirt and has a white collar around his neck. For unknown reasons, Gowther ended up in a wheelchair that seems to float.

Not much is known about Gowther's personality, but unlike most other Demons, he seems to be a kind and caring person as shown treating the doll Gowther like a son to him, wanting his creation to live a life he could never have, and helping Diane (in Drole's body) restore her lost memories.

However, Gowther has shown himself to be subtly vindictive when he chose Mael of the Four Archangels to brainwash him (and everyone who knew Mael) into Estarossa of the Ten Commandments as punishment for murdering his lover, Glariza while staying true to his plan of ending the Holy War at the cost of his own life.

Gowther was unwillingly chosen to be a member of the Ten Commandments because he was such a powerful wizard that he was recognized even by the Demon King at least 500 years before the start of the Holy War. Around that time, he was also brought to the Demon Prison since he denied the role of Selflessness. Just before being imprisoned, Gowther created a doll in the likeness of his lover to be his alter ego which would serve as the only way he could keep contact with the outside world until the start of the Holy War.[2]

At some point, he was also Merlin's master, teaching her magic with her father. It is currently unknown if this happened before or during the start of the Holy War.[3]

After the Demon Clan created a plan to rescue the hostages the Goddess Clan took during the Holy War, Gowther decided to use this occasion to finally escape his prison after 500 years.

As his doll was supposed to assist Melascula in connecting the gate to the Celestial Realm inside the Light of Grace to the Demon Realm, he used Invasion on her to make her link it to the Demon Prison instead, thus securing his freedom. Being asked about his plans by a shocked Melascula, he reveals that he is not interested in the Holy War at all.[4]

After his escape, Gowther met with Drole and Gloxinia (who were then Diane and King in their bodies), as well as with his Gowther doll. There, he decides to release his doll so that from there he could live on his own. Gowther states that he will end the Holy War, but that his death was necessary for that. After some emotional words of farewell to his doll, Gowther asks Diane to take care of him in the future and show him the right path. Also, he restored Diane's lost memory as a thank-you for looking after Gowther in the future. When Zeldris appears to return Gowther to his prison, Drole confronts him to allow both Gowther to escape.

Seeking to end the Holy War, Gowther resorted to a forbidden spell that altered the memories of an individual, also altering the memories of all related topics, including the most powerful gods such as the Demon King. However, this spell required more magical power than Gowther possessed even using the last drop of his life force, so he resorted to the help of his doll. Explaining what he intended, Gowther asked the doll for forgiveness for making him bear such a terrible sin with him.

In this way, the two Gowthers used the forbidden spell to alter the memories of the Archangel Mael, giving him a new identity as the second son of the Demon King, "Estarossa", turning him into Mael's supposed killer. Knowing that the Archangel was the greatest force of the Goddess Clan, Gowther knew that losing it would force them to use the seal of the Coffin of Eternal Darkness and thus end the Holy War. Although in reality, Gowther also chose Mael over other Goddesses of equal power such as Ludociel and Elizabeth as a way to punish him for killing Glariza.

At some point, as a result of using all his life force in the forbidden spell, Gowther died in front of his doll, asking him to realize the dream that he could not. After his death and the disappearance of the doll, Fraudrin replaces him as the Selflessness of the Ten Commandments.

As a member of the Ten Commandments, Gowther is exceptionally powerful. According to Meliodas, he was a very powerful magician, recognized even by the Demon King so much so that he was forcibly bestowed the Commandment of Selflessness to add his great power into the Demon Clan and when Gowther refused to accept it, he was imprisoned for more than 500 years to prevent him from being a threat. Meliodas also noted that Gowther was far more powerful than Fraudrin, stating compared to Gowther, Fraudrin was a worthless replacement.

Gowther was bestowed with the Commandment of Selflessness「 Muyoku」. It causes those inflicted by its curse to lose their memories, feelings, and entire sense of self. Anyone who has a relationship with another before him that is built on what they "desire from each other" is affected by the Commandment.

Not much is known about their relationship, Gowther must have loved her very much, as he created a doll in her likeness after her death, and brainwashed Mael, the murderer of Glariza, into Estarossa as punishment.

Gowther creates the doll so that this would be his eyes, ears, and hands while he was locked up. Merlin claims that Gowther was the masterpiece of his life. The magician cared about him enormously, almost like his own son to him. He took care of giving him a heart so he could feel and continue to exist after his death.

Not much is known about their relationship, however, it was revealed that Meliodas was one of his best friends and was one of the few to know the truth about his doll.

Gowther used to be Merlin's teacher in magic when she was young. In accordance with the Gowther doll, its creator felt a great admiration for the talent and rapidity of learning of his young protege, affirming that he could not imagine what she would be capable of when growing up.

There are no recorded battles involving Gowther.

Retrieved from "https://nanatsu-no-taizai.fandom.com/wiki/Gowther_(Demon)?oldid=151770"
Community content is available under CC-BY-SA unless otherwise noted.