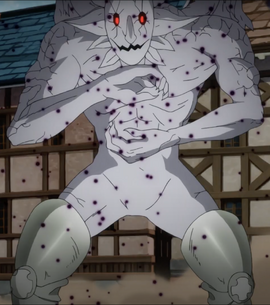 Gray Demons「灰色の魔神 Haiiro no Majin」 (alternatively known as Ash Demons「アッシュ Asshu」)[1] are a class of demonic beings within the Demon Clan, stated to be of a higher rank than the Red Demons.

Gray Demons are tall beings that have long scaly arms, sharp claws and feet, and small wings. They have been seen wearing lower bottom armor and a sun-shaped helmet with a terrifying face. Standing at 900cm (29'6") in height, they are larger than Red Demons and have slender but muscular bodies.

Gray Demons boast a higher intelligence and strength when compared to the Red Demons. They seem to carry the same low opinions of the other tribes, like the rest of their brethren.

At some point of time, a Gray Demon was killed by an unknown individual of great power as it is shown to have died from a large slash wound in the chest. It is shown to have participated in a war between its Clan and the Four Races.

A few years prior to the events of the Kingdom Infiltration arc, its corpse was discovered by Great Holy Knight Hendrickson who studied the Demon's genealogy and biology and conducted countless experiments on its remains.

After Ban sent Hendrickson plummeting down deeper into the underground chambers beneath Merlin's ruined castle, the Great Holy Knight approached the Demon's corpse explaining to the four Sins Meliodas, Ban, King and Gowther how he obtained and experimented on the demon's body, only to conclude that a Gray Demon was a higher being when compared to its Red brethren. Hendrickson then proceeded to take a blood sample from a Gray Demon's corpse and inject it into himself, resulting in tremendous power-boost, prompting his counterattack by first taking out the Fox's Sin of Greed.

After Hendrickson's defeat, Ban tried to destroy the corpse of the Gray Demon as a form of revenge against the Demon Clan. However, Merlin prevents his assault and claims that she intends to keep it as a test subject.[2]

A Gray Demon appeared in Byron to collect human souls for the Ten Commandments' replenishment of their magic powers after a red demon was easily killed by the trio of Holy Knights, Gilthunder, Howzer, and Griamore where they, along with Hendrickson who joined them in the fray, had showed its destructive power similar to the latter in that same form albeit in a larger scale.

Despite that, the Gray Demon was defeated by Hendrickson who used Purge with a single touch with Gilthunder and Howzer assisting, although Griamore had issues with the former Great Holy Knight, concerning about his father Dreyfus' supposed death at the hands of the man who helped them.

During the conquest of the Demon Clan in Britannia, several Gray Demons are seen invading kingdoms and killing several knights.

In Camelot, a horde of Gray Demons fights with the king Arthur Pendragon, Nanashi and some of his soldiers. When one of the demons tells them to choose whether to die or surrender, Arthur claims that they will defend their home until the end. Finally, Arthur and Nanashi manages to defeat and kill all the Gray Demons but are ambushed by a horde of Blue Demons.

Some Gray and Red Demons attend the Ten Commandments during the invasion of Liones. One of them is destroyed by the Ark of Nerobasta.

During their advance to Liones, Elizabeth and Zaratras meet with a group of Red and Gray Demons, but all are destroyed by Hawk Mama. Then, some Gray Demons are called by Monspeet along with other demons in order to sacrifice themselves to load Derieri's Combo Star.

Various Gray Demons are called by the Ochre Demon in Ordan to fight the Seven Deadly Sins, but all get eliminated by Meliodas's Full Counter.

Various Gray Demons are with many other demons fighting with the Holy Knights. Some of them are eliminated by Guila, with the rest being killed by the Archangel Tarmiel.

A Gray Demon is seen in Camelot attacking Arthur when he was in road to recover Excalibur.

Various Gray Demons are part of the Demon Clan army that is faced by the Holy Knights during the Holy War. Several are eliminated by the knights but the rest manages to release their attacks against them. The rest are eliminated by Diane's Queen Embrace and the Four Archangels's Omega Ark.

During the second wave of the army, a Gray Demon is killed by Matrona with a rain of rocks and two more with her Daichi no Kiba. Gray Demons tries along with several other demons to devour Elaine when she falls, but all are killed by Ban.

According to Hendrickson, the Gray Demon is a being higher than the Red Demon itself and its blood can provide the individual access to its strength, becoming a stable vessel of demonic power.

Gray demons are known to make heavy use of spells that govern over death. Depending on the individual, most of them have power levels in 2700-3200 range. A single mutated variety of Gray Demon is known to exist, and whose power level is said to be immeasurable.[3]

Grey demons also have the ability to fire an explosive, dark energy beam from their mouths.[4]

Retrieved from "https://nanatsu-no-taizai.fandom.com/wiki/Gray_Demons?oldid=150311"
Community content is available under CC-BY-SA unless otherwise noted.