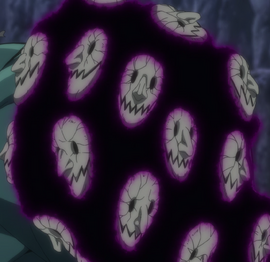 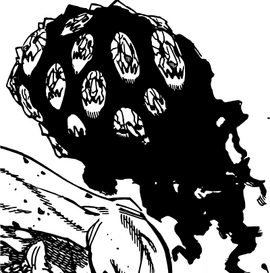 Grayroad「グレイロード」 is an elite warrior of the Demon Clan, serving directly under the Demon King as the Pacifism of the Ten Commandments.

Grayroad is a mutated gray demon. Though Fraudrin notes that lower demons are neither distinctly male nor female, he refers to Grayroad as female, because of her unique level of power and abilities. Her body is covered in her own darkness, and her multiple faces are all capable of speech. Underneath the darkness that hides her form, Grayroad is composed of numerous pudgy, dwarf-sized gray demons, each of whom are able to speak and move freely.

Grayroad is capable of morphing her body into a large network of darkness from which she hangs her incubating eggs. In this form, her faces are spread out across the offshoots of her body, and the eggs she carries are see-through and filled with clear liquid.

Grayroad is cruel to the point of using humans to convert them into lower Demons in order to turn them against their old relatives.

Despite being the youngest member of the Ten Commandments, it is surprising to note that she is incredibly intelligent, since she seems to be very familiar with the laws of Time and magic, as well as the importance of power between the Demon King's Decrees and the simple magical abilities.

It can also be that behind her natural cruelty, Grayroad can easily give in to panic, as when she learns Merlin's origins as well as the magnitude of her magical abilities.

Along with the rest of the Demon Clan, Grayroad was sealed away by the Goddess Clan after losing the Ancient War against the other four races (humans, fairies, giants and goddesses).

As a member of the Ten Commandments, Grayroad is exceptionally powerful. Like all members of the Demon Clan, she possesses their unique power of darkness, similar to Meliodas' at Vaizel. She is capable of utilizing this dark power to passively fly on her own. Her aura, combined with the aura of the other Ten Commandments is so terrifying that it made the normally calm Hendrickson sweat in fear by their presence.

Grayroad is capable of spawning new demons by implanting demon plants into creatures which lack magic and trapping them in egg-shaped pods. These demon plants are about as large as a sesame seed, and thus cannot be removed by abilities such as Ban's Snatch. If left alone, the eggs eventually detach on their own and hatch into servants meant to serve her. If the pods are detached prematurely and thus exposed to a certain temperature, the growth of the egg will accelerate and mature into new demons within seconds. Grayroad has shown the capability to produce Gray Demons and Red Demons through this ability.

Grayroad was bestowed with the Commandment of Pacifism「 Fusatsu」 by the Demon King. Anyone who kills in her presence will have their time stolen from them and rapidly age until they die.

Retrieved from "https://nanatsu-no-taizai.fandom.com/wiki/Grayroad?oldid=154204"
Community content is available under CC-BY-SA unless otherwise noted.