Great Thunder grants the user the ability to generate and manipulate lightning. Zaratras employs this magic power to increase his physical speed and imbue the electricity through his weapons. 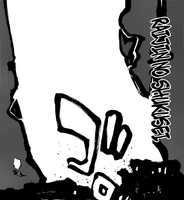