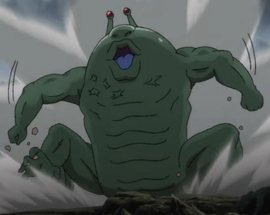 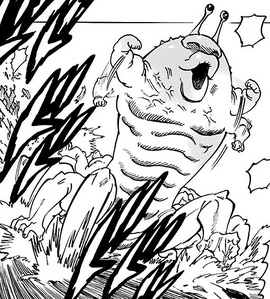 Green Demons (alternatively called Green「 Gurīn」) are a family within the Demon Clan.[1]

The green demons are centipede-like creatures in various sizes, muscular in build, with four arms, and snail-like eye stalks. They also have roughly ten legs shaped like arms. They have human-like noses and lips. Big specimens seem to have a spiky back. As the name suggests, they are green in color.

An Green Demon was on the outskirts of Camelot where Orlondi were hiding, forcing him to escape.

Various Green Demons are part of the Demon Clan army that is faced by the Holy Knights during the Holy War.

Retrieved from "https://nanatsu-no-taizai.fandom.com/wiki/Green_Demons?oldid=138157"
Community content is available under CC-BY-SA unless otherwise noted.