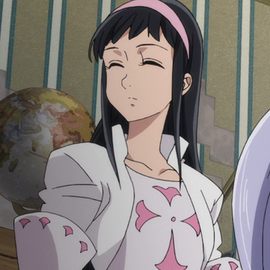 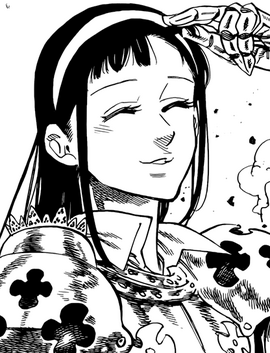 Guila is a young female with a slim build and long black hair. Her eyes are very narrow, giving the impression to be closed at all times.[1] After first being defeated by Meliodas, her hair is cut so her bangs cover her forehead.

Her first attire consisted of a single white one piece with a small white coat, with long white high heel boots. She did not wear any armor other than her gloves and knee protectors. She also wore a pale pink headband on her head.

From her appearance at the Vaizel Fight Festival and on, she wears a full body armor.

Guila is a very dedicated knight who is so faithful that she killed herself in order to chase Elizabeth Liones and the Seven Deadly Sins who entered the Capital of the Dead.[2] Thanks to the demon's blood, she was also extremely confident in her abilities and strength, seeing as how she readily fought Diane and Meliodas together at the same time.[3] In reality, she is truly deeply insecure in herself, according to Gowther; her natural calm, sweet demeanor became disastrous the more impatient she became with herself, as it kept magic from blooming. On her design sheet, it's said weakness and stunted emotional growth led her to be easily used by Helbram. Despite her often cold, deadpan nature, Guila shows a soft side towards those she cares for. Guila has a strong sense of justice, as shown by her dislike of Helbram for making the Deadly Sins seem villainous when they did nothing. She also has a sarcastic sense of humor, as shown when she teases Veronica.

As a child, Guila with her father met the Seven Deadly Sins in person, seemingly admired them. Guila's father was a Holy Knight who disappeared during a mission, which resulted in many deaths.[4] In the wake of his supposed betrayal, she shut herself from the world, prejudiced and wary of everyone, and raised her little brother alone. Guila was initiated into the Holy Knights and obtained the rank of apprentice, becoming the disciple of the Holy Knight, Helbram. Only a day before she tracked down the Seven Deadly Sins to the Capital of the Dead, she still maintained the rank of an apprentice and lacked the strength of an accomplished Holy Knight.[5] Seemingly promoted after having drunk the blood of a demon and gaining tremendous power, she became involved in the plot of the Great Holy Knight, Hendrickson, placing her among the ranks of the enigmatic "New Generation" of Holy Knights.[6]

Guila is a skilled fencer who wields a rapier.[7] Being only an ordinary apprentice Holy Knight with "barely any power" the day before she fought the Seven Deadly Sins, she gained incredible power by drinking the blood of a demon[8], enough of it to be able to overwhelm three Deadly Sins at once, albeit with them not having their sacred treasures. During her mission in Vaizel, Guila used a lance which, being on par with the Seven Deadly Sins' sacred treasures, greatly augmented her abilities.[9][10] She is the only member of the New Generation Holy Knights to truly retain her powers.

Guila was the disciple of Helbram.[13]

It is been said Guila gets on well with Jericho due to her easy-going personality. Guila and Jericho worked as a team under Helbram during the raid on Vaizel and the Sins infiltration in the kingdom. They seem to have a friendly relationship with each other, as she was the first one to welcome Jericho to the New Generation. There is a level of trust and care between them. During one training session, she noticed Jericho was troubled, and promptly stopped it, so she could ask what was wrong. Jericho was who handed the truth to Guila about her late father, and thus sent her down the path that laid to her betraying the order. Guila had asked Jericho multiple times to tell her why she drank the demon's blood, showing that she was curious about her past, too.

When Guila betrayed the Holy Knights, she pleaded for Jericho's forgiveness and insisted she had no choice. She then carried Jericho to safety, at the expense of making her own younger brother walk. She seemed genuinely concerned to see Jericho hurt, asking her to stop yelling so that she wouldn't strain and hurt herself even more; she seemed moved when Jericho opened up about her past, watching Jericho breakdown with a hurt expression of her own.

Days after Hendrickson's defeat, they met up outside of Guila's home. Jericho blushed and told Guila she looked cute, and Guila returned the compliment. She seemed concerned when Jericho rejected her invitation to come in for tea.

After the Commandments were defeated at Liones, when Jericho vented her frustrations about Gustaf on the river water, Guila was once again deeply bothered by seeing Jericho that upset. She noticed Jericho's powers manifesting before Jericho did herself, and promptly sprinted to her side with excitement.

Guila loves Zeal very much, having declared that she will do anything for him, going so far as to kill individuals who harm him in any way, due to the influence of the demon's blood.[14] It was revealed that she drank the demon's blood in order to keep him safe and protected. She continues to fight for the Kingdom, this time as a better person, in order to keep that promise of safety to him. Even still, due to her love for him, she has a tendency to put herself in harms way, sometimes to a reckless degree. Though all Zeal wants is to keep her safe.

She became lovers with Gowther after the Kingdom arc, but it was revealed to be due to Gowther's brainwashing. When Gowther released her from his brainwashing, she was initially horrified, gasping in shock and getting as far away from him as she could. However, she politely rejected him, on the grounds that she was grateful that he remembered her father. She left him with a finite, "goodbye" that suggested she did not plan on seeing him any time soon, or ever again. During the Great Fight Festival arc, Deathpierce mentioned Gowther by name (along with his status as a Commandment) to Guila, and she dropped into a moment of deeply unsettled concentration. She brought back into 'reality' when Veronica asked her if she was okay. This further displayed the fear she feels towards him. Guila initially referred to him as "that person" in her thoughts, suggesting that she had been attempting to distance herself from him. However, at the same time, she was shocked to hear that he was a Commandment, and still wishes to understand what he exactly is.

Guila first met Veronica at the Vaizel Fight Festival, where they clashed and she was presumed dead by Guila's hands. After the final battle with Hendrickson, Guila and Veronica found themselves training together at some point. Guila had expressed to Jericho the guilt she felt over what she had done to the princess, so she assumed Veronica would hate her. Instead, Veronica pushed forgiveness, because she feels she'd go just as far to protect her own sibling, so she doesn't judge her, to Guila's utter shock. She asked Guila to be her swordsman trainer. Since then, they've developed a friendship. Veronica reminds her she needs to survive for her brother. They also have a scrappy dynamic, where they'll playfully fight or teasing each other.

Retrieved from "https://nanatsu-no-taizai.fandom.com/wiki/Guila?oldid=153003"
Community content is available under CC-BY-SA unless otherwise noted.