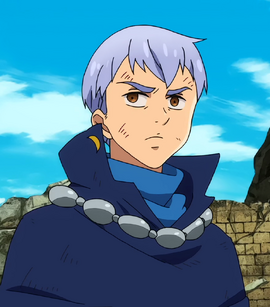 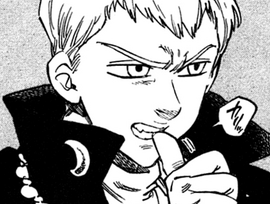 Gustaf has short hair and is dressed in a regal attire.

Though not much is known of Gustaf's personality, he is shown to be loyal to Helbram (until when Helbram revealed his intention to kill humans); as he aided his superior by offering his powers to Helbram's Link. Gustaf appears to have no confidence on his sister in becoming a Holy Knight like himself. Despite that, he shows concern of his sister's safety.

Gustaf argued with his younger sister Jericho that she'll never become a Holy Knight like him when she tells him of her dream of becoming one.

While fighting Diane, Helbram used his ability to call upon Gustaf and asked if he could borrow his powers, to which Gustaf willingly agreed. Gustaf's assistance was short-lived, however, as he was taken out after Helbram used place-switching magic to avoid taking a direct hit from one of Diane's powerful techniques, leaving Gustaf to take the full impact of the blow.[2] He is later seen to be perfectly fine, with no sign of injury whatsoever. When King asked Helbram whether he still intends to kill humans, Gustaf and his comrades were shocked of their superior's true nature and as when the Cardinal ordered his subordinates to give all their powers to him, Gustaf and the others tried to break their connection to Link, only to be taken control by Helbram's Blind Follow and gave all their powers to the mad fairy to battle the Grizzly's Sin of Sloth.

After an intense fight between fairies, Helbram's defeat broke the Link orb which freed Gustaf and his fellow Holy Knights from his control although they were knocked unconscious when the Link orb's power feedback pushed them back hard. Once woken up, Gustaf found himself in the ruined castle that him and his fellow Holy Knights were once in much to his shock and tries to wake his comrades up. Gustaf remembered Helbram forcing them to use their powers through Link and hurtful words towards his sister, but was shocked to see the Liones capital being attacked by Demon like creatures and the Holy Knights were getting slaughtered, which Gustaf called it was like Hell.

After relaying orders to assist their comrades fend off the Demon hybrids and evacuate the citizens to the Holy Knights who survived the castle attack, Gustaf searches for Jericho, hoping she was safe. But unfortunately, Gustaf was apparently crushed to death by his own sister's Demon form, leaving her inner self desperately plead anyone to stop her while her darker side gloated in triumph, holding her brother's body like a trophy. As Jericho was about to devour Gustaf, the latter was saved by Gilthunder who recently recovered from Hendrickson's Acid and pleaded for someone to save his sister which Ban from the Seven Deadly Sins did by removing the strange "plant" inside of her which transform her back to normal.

Although still injured from the ordeal, Gustaf, assisted by his fellow comrade, joins the Holy Knights surrounding Merlin's old castle to bar Hendrickson's escape while the Sins dealt with him. After the Sins were defeated by Hendrickson, Gustaf and the rest of the Holy Knights attacked everything they got as he used his Ice Fang power as revenge for his sister but soon fell to fatigue of his wounds.

Later on, when Elizabeth awakened her powers after Hawk's death, Gustaf was healed along with everyone else in the kingdom. He was given the plan of attacking both Meliodas and Hendrickson in order for the former to build up his ultimate technique: Revenge Counter.

Witnessing Hendrickson's defeat, Gustaf and his comrades saw Meliodas fall from the sky who immediately got back on his feet but collapsed immediately afterwards. Seeing King Bartra Liones appear with Merlin, Gustaf and all the Holy Knights bent their knees before their king in shame of their atrocities towards the people of the kingdom and blindly following Hendrickson and his evil plot all in the name of the Holy War, demanding heavy punishment for their sins only for the king to tell them to instead dedicate their power and efforts to restore the kingdom and prevent the same mistake from happening to avert the Holy War.

Together with Guila, Gustaf leads a Holy Knights company to Zeldon where they meet with Denzel Liones and his fellow Pleiades of the Azure Sky to discuss the situation of the Ten Commandments. Along the way, Gustaf is annoyed by the indifference of Guila's subordinate, Nikka, receiving an argument from Guila.

During the meeting, Gustaf shudders when Denzel says that the Ten Commandments are a much greater threat than Hendrickson, further surprising him when he reveals that Gowther could be a member of the Commandments, unable to clarify or deny it. When Denzel reveals Nikka's identity, Gustaf is surprised to discover that she is actually Princess Veronica.

Gustaf participates in the battle to defend Liones from the Ten Commandments assault.

During the battle, one of the Holy Knights under Zeldris' commandment effect stabs Gustaf with a knife in the stomach. Gustaf, still injured, uses his powers to stop Grayroad from turning Jericho and the other captured civilians into demons. While he fails to stop the process himself, he buys time for Merlin to step in and stop the process herself.

Due to the injuries suffered in battle, Gustaf passes away.[3]

Gustaf's full strength is unknown, but as a Holy Knight it can be assumed he is quite powerful in his own right. Gustaf has shown great endurance as he survived a Link force feedback and his sister's crushing grip, which would have been considered fatal. He even continued throwing his Ice Fang power attacks even in his injured state.

Jericho and Gustaf are siblings although at first they were not on good terms. This was because in the past when she told him of her ambition to become a Holy Knight like him, he told her to give up and to stop embarrassing him. However, in Gustaf dream state, it was hinted that the reason he said that is because he was worried about her and actually cares for her as despite Jericho transform into a Demon, Gustaf begged for someone to save her and not kill her. In the Holy Knights' battle against Hendrickson, Gustaf fought against his former superior in vengeance for his sister.

Before he revealed his true nature Gustaf viewed him as a strong superior and had a considerably high amount of trust and loyalty in him to even endure the discomfort of the link to aid his former superior as well as remained loyal without hard feelings when Helbram swapped places with him to avoid direct damage. Just like all of Helbram's disciples he was shocked when it was revealed his master was a murderous fairy.

Retrieved from "https://nanatsu-no-taizai.fandom.com/wiki/Gustaf?oldid=136917"
Community content is available under CC-BY-SA unless otherwise noted.