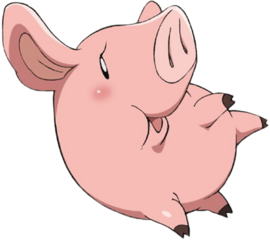 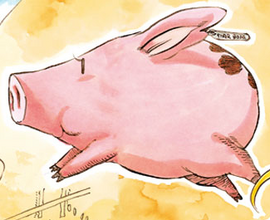 Hawk「ホーク」 is a talking pig and Meliodas's companion. He is introduced as the custodian of the Boar Hat bar who helps clean up the disgusting food scraps left by customers.

Hawk is a relatively large pink pig who wears an earring with the words star boar on his left ear.[3] His body is well rounded and his legs are fairly short. His charming point is the clover-shaped birthmark on his rump. His body and appearance are similar to a typical Gloucestershire Old Spots Pig. Like his mother, his ears are shown to be M-shaped.

Hawk is shown to be an easily annoyed pig as seen when Meliodas lies in jest, does perverted things to Elizabeth and when Elizabeth is being airheaded.[4] He also appears to care a lot for his friends and seems to be a mama's boy occasionally crying for help from his mom.[5] Hawk tends to have a big ego and is prideful, claiming that he is stronger than the Deadly Sins and even joked that his strength to be in the same class as the Demon King but tends to be very frightened when someone far stronger than him attacks.

Hawk was born in the Purgatory under the name of Mild and lived with his older brother, Wild. Before Hawk could remember him, he was kidnapped by the Demon King and sent to the Living World to act as his window to spy on his eldest son, Meliodas, through his eyes.

Ten years ago, Hawk used to live together peacefully with his mother in an unknown forest until he spotted an unconscious knight, Meliodas, who was laying on the side of the road and dragged him back to his home, a cave somewhere near Camelot. Once Meliodas was awake, the two ended up speaking with one another, where Hawk mentioned that he felt like he used to fly in the sky, thinking he was a Dragon back in his past life, when Meliodas thought he was Wandle. The two argued over Hawk's name, until Hawk mentioned a restaurant named Pig Leg where Hawk loved the leftovers, which led Meliodas and Hawk to team up and work together, since Meliodas can't work as a knight anymore due to an incident in Liones. They decided to open up the bar "The Boar Hat", named after the restaurant Hawk mentioned by selling his Sacred Treasure and building it on Hawk's mother back. Since then, Hawk and Meliodas became partners in business, as Meliodas is the owner while Hawk is the cleaner who ate the leftovers.

As a pig, he has a very sensitive nose which he claims is capable of smelling objects, such as leftovers, up to 1.2 miles away. His nose has proven useful and valuable in combat as he is capable of searching for enemies and tracing where they are.[6] Hawk is shown to be very skilled at making dresses. He is capable of using his hooves and ears as hands to hold things such as a hammer and even used it to seal Meliodas in a barrel. He is capable of ramming into any opponent, using this skill to take out Alioni and his teammates on his own.

It was recently revealed that Hawk has a connection with the Purgatory. According to Merlin, Hawk is, in fact, a living portal between the world of the living and the Purgatory. Due to this, someone in one of the two realms can observe the other through Hawk's eyes, as the Demon King did to watch over Meliodas. Merlin was able to use a spell to send Ban to the Purgatory through Hawk.

Being a creature from the Purgatory, Hawk is incredibly resilient and survivor, being able to resist Hendrickson's Dead End. Meliodas claims that the Demon King designated him as his surveillance route because of his resistance compared to the ordinary animals he used to use.

Transpork「 Toransupōku; literally meaning "Transformation"」: After his training in Istar, Hawk developed the ability to absorb the abilities and characteristics of anything he eats that has magic power. The transformation disappears when he excretes the food.

Meliodas and Hawk's relationship has its ups and downs. They tend to fight a lot, but they seem to care about each other. They recognize each other as companions, but Hawk is shown to be a subordinate to Meliodas. Hawk strongly values his relationship with Meliodas, having sacrificed his life to protect Meliodas from a fatal attack. They work together at the Boar Hat.

Elizabeth loves talking piggies and appears to adore Hawk as a pet.[19] He is very protective of Elizabeth acting like a fatherly figure while reprimanding Meliodas on his lecherous acts towards the princess of Liones to the point he tied up Meliodas each night before bedtime with Elizabeth.

Not much is currently known about the nature of their bond, but it seems that he loves his mother very much, calling her whenever he is badly injured and needs help. It seems the reason that Hawk has such a high opinion of his own strength is that he thinks he will become as strong as she is.

At first, Hawk was annoyed with Ban for freaking out over his ability to talk. However, they soon get along with each other fairly well, regarding each other as trustworthy companions, and that Ban even calls Hawk "Master." They are willing to support each other, as shown when Hawk carries Ban whenever he is drunk or exhausted. Hawk was disgusted at Ban's acceptance of the request from the Goddess Clan, to kill Meliodas, and tried to stop him, but Hawk knew he wasn't strong enough.

Hawk has a strange relationship with Diane at first, as he fears her eminently for her love of pork and trying to eat him, but the two soon begin to get along with one another. Because of that bond, Diane saves and protects him on a few occasions.

King and Hawk seem to share a good, yet odd friendship, as sometimes King calls him Mr. Pig, Little Porker, or Little Piggy in such manner, much to Hawk's annoyance. Despite this though, the two are close and are on good terms with each other.

Hawk and Gowther have a friendly, yet strained relationship. This is mostly due to Hawk's dislike of Gowther's lack of empathy and weird behavior, and how he disregarded his sacrifice during the battle against Hendrickson, yet he seems to have let that go since. The two of them seem to be almost surprisingly close, enough that during their battle at the Great Fighting Festival, Hawk spent the majority of the tournament match trying to talk Gowther out of attacking him and Escanor, despite knowing how emotionless Gowther can be. Despite this, Gowther simply apologized to Hawk and coldly stated his intent to continue the fight, knocking him and Jericho out to avoid dealing with them and to focus solely on Escanor. After regaining his emotions and memories, like with Elizabeth, Gowther's friendship with Hawk has become less strained and more genuine in nature.

Hawk and Merlin have a good relationship. Merlin sees Hawk as a hero for saving Meliodas and believes that they should stick together due to both being 'boars.' And as such, Merlin often indulged Hawk by performing experiments on him to see the results or gave Hawk some eccentric items from her collection to use that are suited for him.

Like Elizabeth, Hawk met Escanor during the Great Fighting Festival in Vaizel, being partnered with him during the festival. Their first impressions of one another during the festival were poor. Hawk viewed Escanor as a weakling and Escanor, in turn, was both confused and frightened by the fact the Hawk was a talking pig. However, after seeing Escanor's true power during the festival, and after seeing Hawk's bravery during the events and how he carried him around for the remainder of the festival, the two quickly became close friends. Though Hawk is just as wary of Escanor's power as everyone else, he feels comfortable enough around Escanor's daytime form to travel around him closely and have conversations with him. Escanor, in turn, shares this closeness with Hawk, confiding to Hawk about his feelings towards Merlin and asking him if he would see if she felt the same way, although Hawk did point out how shameless and forceful he was acting considering that he was asking for a favor. He even cried and was in denial when he had heard Escanor died.

Retrieved from "https://nanatsu-no-taizai.fandom.com/wiki/Hawk?oldid=154906"
Community content is available under CC-BY-SA unless otherwise noted.