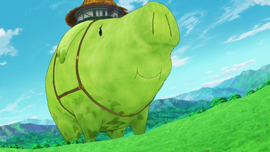 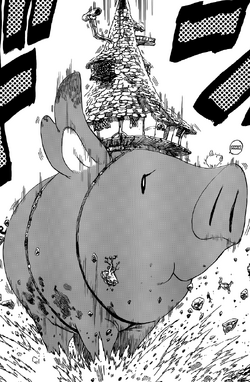 Hawk Mama「ホークママ」 is Hawk's mother and the extremely large, green pig who transports the Boar Hat bar. She is introduced to live underground and transports the bar Boar Hat with her head. So far, her name remains unknown but she has gained many aliases.

It is later revealed that she was never a pig, but an empty moss shell in which Chaos was sealed in by the Supreme Deity and the Demon King out of fear of their creator.

Hawk Mama is a humongous pig who wears the Boar Hat bar like a hat. Like Hawk, her ears are shown to be M-shaped. She is depicted to have lime green colored skin; this is because she is a shell composed of multiple layers of moss.

At the time she was known as Mother of Chaos and the Great Oshiro, Hawk Mama had a white color. It was said that her body radiated white light.[3]

Little is known about her as of yet but it seems that she is a loyal friend of Meliodas as she helped carry the Boar Hat bar on her back and loves her son according to Hawk. She is shown to have a very trusting personality as she has on many occasions waited for Meliodas to return for many hours underground before moving on.

Hawk Mama is a provisional form of Chaos, that the Demon King and the Supreme Deity sealed it away in.

Long ago, she was known as the Mother of Chaos, giving birth to the vampire royalty and all monsters coming from her. The details of this event are unknown though, but legends say that it was a being that contained so much darkness that it was feared by the Demon Clan, while at the same time it possessed so much light that it was revered by the Goddess Clan.[4]

In accordance with the legends of the Celestials, Hawk Mama was present in the battle that took place in the Sky Temple, where she saved the Goddess Clan and the other races from the Indura, allowing the Goddesses to seal it in the Egg Rock using the Winged Sword. She was revered as a deity by the Celestial Clan, who called her the Great Oshiro.[5]

Ten years ago, Hawk Mama used to live together peacefully with her son Hawk in an unknown forest. One day, her son spotted an unconscious knight, Meliodas, who was laying on the side of the road and dragged him back to his home, a cave near Camelot. Once Meliodas awoke from unconsciousness and befriended her Hawk, he reveals himself to be the Dragon's Sin of Wrath who commented that Hawk’s mom is the size of a movable fortress.

Since then, Hawk Mama became the carrier of the Boar Hat after Meliodas sold his Sacred Treasure Lostvayne for funds to open business with her son as the cleaner eating leftovers.

Hawk Mama has helped Meliodas with his bar Boar Hat for the past ten years. When Hawk was burnt by Twigo and crying for his mother's help, she came to Meliodas and the rest to take them away from the knights and bring them to Bernia to get some information regarding the locations of the other Seven Deadly Sins.

Hawk Mama took them to the Forest of White Dreams where they would find Diane, the Serpent's Sin of Envy. However, she had to travel to Dalmary Town where she waited outside of the town, waiting for Meliodas to get better.

Hawk Mama transported the Seven Deadly Sins to the Capital of the Dead to find the next member King, the Grizzly's Sin of Sloth. She was somewhat upset at the Sins for taking a long time and requested that they inform her prior to future occurrences. She waited outside of the location of the Capital of the Dead for the rest to come back.

Hawk Mama took the Seven Deadly Sins to Biron to get information and subsequently to Vaizel to find a Sacred Treasure. She entered the area later as the fights were going on whilst carrying Diane's clothes, which she dropped off in the pit where Diane had fallen. She proceeded to locate the group to see if they were alright and transported them to their next location.

At the end of the events that took place in the Kingdom and with the help of Merlin, she transported the Seven Deadly Sins to Camelot where an Albion was attacking. The Albion tried to attack her, but she was too swift, and the Sins eventually jumped off to engage in combat.

On the way to Istar, Hawk's mother and the Sins encounter an obstacle from Monspeet: Purgatory Fire. Meliodas planned to counter the strange technique but, to his surprise, she swallows it whole without sustaining any damage.

While the Demon Clan is taking control of Britannia, Hawk Mama continues to transport the Boar Hat which is now under the management of Elizabeth and Hawk. When Golgius sees her in the outskirts of Liones, he confuses her with a demon and faints.

Hawk Mama transports Hawk, Elizabeth and Zaratras to Liones after learning of the invasion of the Ten Commandments. On the way, a band of Gray and Red Demons attack them; however, Hawk Mama manages to destroy them all.

Hawk Mama receives a direct blow from Derieri's Combo Star who had loaded it with 54 blows. Hawk Mama falls while being very wounded and the Boar Hat ends up destroyed.

After the battle with the Ten Commandments, Hawk Mama manages to reach Liones where Hawk is glad to see her alive.

After rebuilding the Boar Hat, Hawk Mama is responsible for transporting the Seven Deadly Sins and Elizabeth to their next mission in Corand. Along the way, Hawk Mama takes care of a Red Demon that appears with a blow of her nose.

While transporting everyone to Camelot to free the hostages from the demons, the trip is interrupted by Chandler, unleashing a battle between him and the Sins. In the end, when Chandler was about to deliver the final blow, Gloxinia saves everyone by taking Hawk Mama and the Sins in a huge flower. Hawk Mama then proceeds to take everyone away from the battle.

After Merlin deceived Zeldris, she teleports the entire Boar Hat to Camelot where the Sins proceed to take all the hostages to Liones.

When the new Holy War against the Demon Clan begins, Hawk Mama accompanies the Sins as part of the Search-and-Destroy Force. During the battle against the demon army, Hawk Mama carries Hawk, Elizabeth and Gowther while the princess talks and reasons with the demons to abandon the battle.

When Estarossa appears on the battlefield and releases his Evil Hound, Hawk Mama and the soldiers are saved from the Hellfire by Diane who takes them all underground.

During the second wave of the Demon army, Hawk Mama supports the Holy Knights in the battle.

After returning to Liones with the Boar Hat, Hawk Mama is called by Hawk to warn her that the Demon King returned. Hawk Mama tells Hawk that he is "sleepy", which Hawk does not understand. By showing an image of Arthur Pendragon in her eyes, she goes on to say that the balance has been severely disrupted and that after a long time the king will be born.

Hawk Mama then goes along with Hawk to the battlefield where the Demon King stands with a new, gigantic and monstrous vessel created from the same land of Britannia. Frightened, Hawk ask her to turn back.

After the Demon King was defeated, Hawk Mama remains in Lake Salisbury until Merlin teleports there along with the Sins and Elizabeth. Hawk mentions that he told his mother to return, but that she did not move and was absorbed with looking at the water of what used to be the lake.

When Merlin pulls Arthur out of the Boar Hat and awakes him as the "King of Chaos", Hawk Mama shudders enormously.

When Meliodas reproaches Merlin for using the Seven Deadly Sins to revive a being that may never exist, the Lady of the Lake states that Chaos exists and that they have already been face to face with it for a long time. When Meliodas and the rest still don't appear to understand, the Lady of the Lake reveals that they have been traveling on it and that for all that time, it has been waiting for her resurrection; leaving everyone shocked to see that she is refering to Hawk Mama. There, Hawk Mama deflates, with King revealing that she was never a pig but a shell made of multiple layers of moss, whose content, Chaos, is now inside Arthur.

Not much has been revealed about Hawk Mama's abilities or equipment but she is also able to devour Monspeet's powerful ability Gokuencho that was capable of eating through a mountain with little to no known consequence, much to the Seven Deadly Sins' surprise.[6]

Hawk Mama was strong enough to send Twigo and the Beard of the Mountain Cat knights flying when she revealed herself[7], as well as charge through and kill an entire group of red and grey demons by herself with what seemed like little effort.

She also proves capable of facing and considerably damaging an Indura, who was said to possess greater power than of the Ten Commandments.[8]

Hawk Mama is tremendously durable, as she went a long chain of attacks from Derieri's Combo Star (over 50 hits) which was powerful enough to send her flying through a forest, after which she just walks it off without a single scratch though it took some time to shake off the attack.

Not much is known about their relationship, but Hawk trusts and loves his mother and she is never far from his side; appearing as soon as he squeels.

There is not much known about their relationship, but Meliodas trusts her and has shown a great respect for her abilities.

While there is not much interaction, she seemed shocked about her size at first, but has taken a liking to her.

The two seem to get along well, as they often talk to each other when on the road.

Retrieved from "https://nanatsu-no-taizai.fandom.com/wiki/Hawk_Mama?oldid=145751"
Community content is available under CC-BY-SA unless otherwise noted.