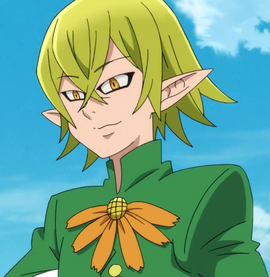 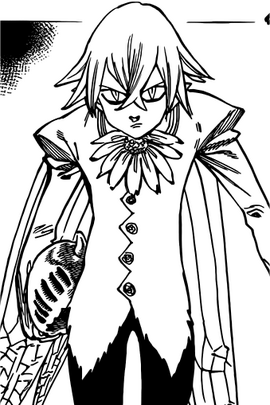 Helbram「ヘルブラム」 was King's closest friend. After being corrupted and turned against his friend, he affiliates with the Holy Knights under a human appearance. He was killed during the Kingdom Infiltration arc, but his soul continued to reside in his old helmet thereafter, allowing King to communicate with him, until having his helmet crushed during a sacrifice.

As Love♡Helm
Armor
As a Human

In his original Fairy form, Helbram has a smaller body with a pair of wings. He has a youthful appearance with what seems to be eye liner perorbiting his eyes, which seems to get darker as he fights. He wears a long sleeved shirt accessorized with a sunflower-like collar, black, tight-like pants with black, pointy-toed shoes. He always has the helmet that he bought from the humans, either on his head or under his arm.

In human form, Helbram takes on the form of Aldrich, the elderly knight he killed, he wears a set of copper-colored full body armor, adorning it with a purple high-collar, cloak on top. He usually covers his face with a unique helmet that has hammerhead horns with a sky blue crest on it. He has an eye-patch that covers his left eye. He has a scruffy face with a beard.

As Love♡Helm, Helbram took the disguise of a very tiny man, with a helm covering his face, a cloth that draped from the helm that covered his body, and very thin limbs, which were the only parts of his body not covered.

One can be fooled thinking Helbram has a serious personality because of his human face, but unless he's in a time of great crisis he tends to be quite playful even sometimes during fighting (such as his fight with Meliodas on which he constantly uses playful tones), another example is seen when he jokes that Meliodas' decoration of Guila's face was not very bad and calls it cute even though he hates humans.[1] Helbram was also shown to like doing research, even taking notes during battle. Helbram is shown to be a flirter as he usually called any female he saw a "cutie-pie". Helbram appears to be just as cruel, ruthless and sadistic as the other Holy Knights, as he once tried to kill Diane just to make King upset. Helbram is also prideful and arrogant, believing that the Sacred Tree favors him more than King.

Seven hundred years ago, Helbram was a kinder and trusting fairy, enjoying the company of humans and was interested in their cultures and philosophies. However, after seeing humans tearing off the wings of his fairy friends and subsequently killing them, the event drove him mad developed an immense misanthropy and so began killing humans for five hundred years.

Helbram lived in the Fairy King's Forest along with his fairy friends and the Fairy King Harlequin. Unlike King, Helbram was very interested in humans, despite King warning him that all humans are never trustworthy. When Helbram and Elaine learned that King learned how to make his own clothes from a human merchant, he playfully chided his best friend for his earlier distrust of humans.

One day, Helbram and his friends went out of the forest and entered the human world, meeting a group of human travelers who promised to give them human artifacts. They soon realized that they were tricked, and the merchants started to rip off their wings to sell for money. When King arrived attempting to save Helbram, he became distracted by the dead bodies of his clansmen, and was slashed on the back by Aldrich. Seeing this, Helbram killed Aldrich out of revenge. He decided to disguise himself as the very warrior he killed, planning to kill every human.

For five hundred years, Helbram continued to kill humans, until he suddenly re-encountered King in middle of a village that Helbram had just destroyed. They were both shocked to see that the other one was alive, and Helbram begins to tell King what happened to him and his desire to end all humans. Knowing that he had to stop his best friend, King pierced Helbram through the chest with a rose, ending his life.

Unknown to King, Helbram's body was found and taken to a black market, circulating there for 150 years until Hendrickson found him and used a forbidden technique that was passed down from the Druids called Enslavement of the Dead, which brought him back to life and made him serve Hendrickson as a Holy Knight and his right hand man.

Helbram is an exceptionally strong Holy Knight who is capable enough to single-handedly overwhelm King without much effort, despite King using his Sacred Treasure. He is even able to fight on par with Meliodas in his incomplete demon state, even though his powers were restrained in his human form. Helbram is also capable of magically disguising himself so well that not even individuals of the caliber of the Seven Deadly Sins could see through. In Helbram's true form, Helbram appears to become much stronger, as Howzer points out his powers now match that of a Great Holy Knight. His weapons are made from the Sacred Tree just like King's, and he can even summon the branches of the tree itself. Like King, Helbram is able to fully control its power.

Guila is his disciple, and he appears to have a fair amount of faith in her.

King and Helbram were best friends in the past. Helbram addresses King using his real name, "Harlequin"[3], showing that they have a great degree of familiarity between them.

Retrieved from "https://nanatsu-no-taizai.fandom.com/wiki/Helbram?oldid=151917"
Community content is available under CC-BY-SA unless otherwise noted.